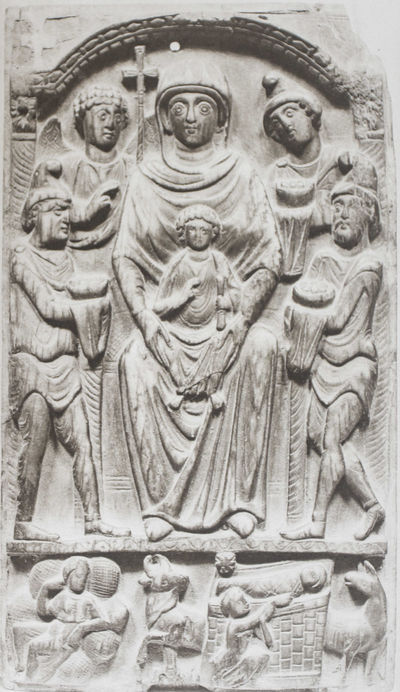 by Dalton, O. M.
London: Printed by Order of the Trustees, 1909. First edition. Hardcover. vg. Quarto. li (i), 193 (1)pp., cxxv plates. Original three quarter Morocco over burgundy cloth with gilt lettering, ruling and tooling on spine; raised bands. Top edge gilt. Marbled endpapers. "The present catalogue deals with the carved ivories of post-classical, mediaeval, and more modern times contained in the Department of British and Mediaeval Antiquities. The history of the collection will be found in the introduction, and it is of some interest to note that the greater part of the series was acquired rather more than fifty years ago, though additions of considerable individual importance have since been made." (Preface). The introductory pages are divided into six chapters: 1. The history of the collection, 2. The uses of ivory carvings, 3. Relation of ivory carving to other branches of art, 4. Importance of the art at different periods in various countries, 5. Questions of date and authenticity, 6. Material and technique, while the main catalog covers ivory carvings of the Christian era in Roman, Early-Christian and Byzantine, Early Mediaeval and Romanesque, Gothic, Renaissance and later periods, and Oriental ivories. The descriptive catalog is illustrated with 125 lithographic plates depicting 613 pieces at rear, and in-text offset reproductions of photographs and drawings. The catalog contains indices of donors, and authors, a general index and a conversion table inches to millimeters. overall in very good condition. (Inventory #: 44240)
$500.00 add to cart or Buy Direct from
Eric Chaim Kline Bookseller
Share this item