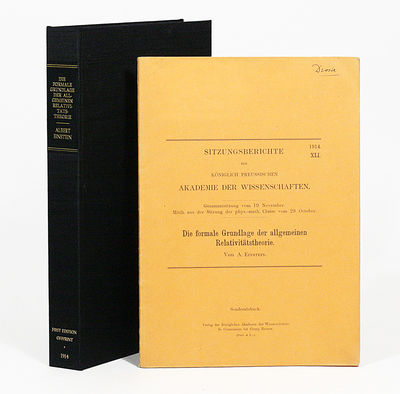 by EINSTEIN, ALBERT
Berlin: Königlichen Akademie der Wissenschaften, 1914. FIRST EDITION OFFPRINT. Original wrappers. Fine. FIRST EDITION, COMMERCIAL OFFPRINT ISSUE, of Einstein's important 1914 paper on the development of general relativity. "In summer 1914, Einstein felt that the new theory [general relativity] should be presented in a comprehensive review. He also felt that a mathematical derivation of the field equations that would determine them uniquely was still missing. "Both tasks are addressed in a long paper, presented in October 1914 to the Prussian Academy for publication in its Sitzungsberichte. It is entitled 'The formal foundation of the general theory of relativity'; here, for the first time, Einstein gave the new theory of relativity the epithet 'general' in lieu of the more cautious 'generalized' that he had used for the Entwurf" (Landmark Writings in Western Mathematics 1640-1940). "According to John Norton ('How Einstein Found His Field Equations'), this major review article was intended to convey the full content of the 1913 'Entwurf' theory: 'The principal novelty lies in the mathematical formulation of the theory. Drawing on earlier work with [Marcel] Grossman, Einstein formulated his gravitational field equations using a variation principle. Using this richer mathematical structure Einstein offered a proof purporting to demonstrate that his theory had the maximum covariance compatible with the hole argument; that is, covariance under 'justified' transformation between the 'adapted coordinate systems' he had introduced with Grossman'" (Calaprice, The Einstein Almanac). Offprint from: Sitzungsberichte der Königlich Preussischen Akademie der Wissenschaften, XLI, 19 November 1914, pp. 1030-1085. Berlin: Königlichen Akademie der Wissenschaften, 1914. Octavo, original wrappers; custom box. Neat early ownership name on front wrapper. Only the slightest wear; a fine copy. Rare. (Inventory #: 2124)
$4,500.00 add to cart or Buy Direct from
Manhattan Rare Book Company
Share this item

London : np , 1939
(click for more details about Photograph of Virginia Woolf signed by Gisèle Freund)
View all from this seller>