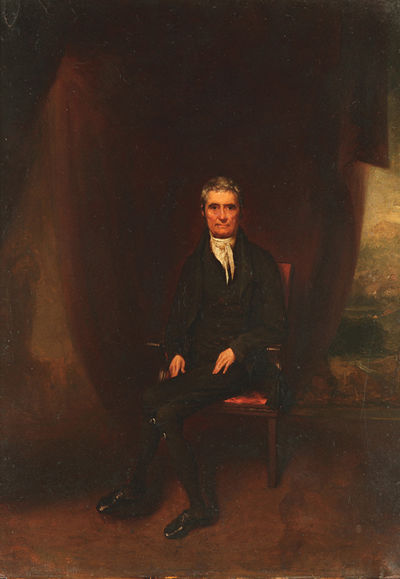 The artist, William James Hubard, was born in Warwick, England. Michael David Zellman relates in 300 YEARS OF AMERICAN ART that "[a] man named Smith spotted Hubard's early talent for cutting likenesses from paper and exploited him as a child prodigy in England, before bringing him to the United States in 1824. After three years in Boston and New York City, Hubard broke ties with his manager. Gilbert Stuart persuaded Hubard to give up silhouettes for oil paints. With the help of portraitist Thomas Sully, Hubard began a career as a portrait painter in 1829." He specialized in small cabinet-sized portraits which, like this portrait of Marshall, usually measured about twenty-one by seventeen inches, with the subject full- length in a dark but dramatically lighted setting. While working in Baltimore, he embarked upon a project of painting a series of American statesmen. He completed a portrait of Andrew Jackson (present whereabouts unknown), and painted John C. Calhoun (Corcoran Gallery of Art, Washington), and Henry Clay (University of Virginia, Charlottesville). Hubard established residence in Virginia in 1831 and spent most of the rest of his life there. His output of Virginia portraits is probably less than seventy-five. During the 1850s Hubard became interested in sculpture and established a foundry in Richmond for casting bronzes. When the Civil War broke out, he turned his hand to the production of ammunition for the Confederate army. In 1862 he died in an explosion in his foundry while experimenting with artillery shells.

While one might be tempted to attribute Marshall's ungainly appearance in this portrait to Hubard, it is virtually certain that what we see is the way the Chief Justice actually looked. According to his colleague, Justice Joseph Story, Marshall's body "seemed as ill as his mind was well compacted." He was, said Story, "without proportion," and "his arms and legs dangled, looking half dislocated." Attorney-General William Wirt described Marshall as "tall, meager, emaciated, his muscles relaxed, and his joints loosely connected but his eyes possessed an irradiating spirit which proclaims the imperial powers of mind which sit enthroned within."

Marshall almost invariably ordered multiple examples of portraits painted of himself for those of his children who requested them. In this case, five identical versions are known, located respectively at John Marshall House (Richmond, Virginia), University of Virginia (Charlottesville), National Portrait Gallery (Washington), a previous example sold by this firm to a private collector, and this present example, from the Estate of Charles Boyd Coleman, Jr., Chattanooga, TN. Further, this example descended in the family of Lewis Minor Coleman, Jr., son of C.S.A. Lt. Col. Lewis M. Coleman, and Mary Ambler Marshall, daughter of James K. Marshall and granddaughter of John Marshall (1755-1835). Lewis M. Coleman Jr. was also related to the family of Henry Dearborn by his marriage to Julia Wingate Boyd, daughter of Annette Maria Dearborn Boyd, who was the daughter of Greenleaf Dearborn (1786-1846) and great granddaughter of Henry Dearborn (1751-1829) on her mother's side.