Poetical Works of George Meredith, The 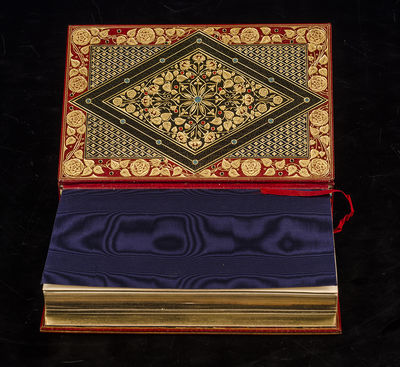 The 'Jansenist Style' was popular in the late seventeenth and early eighteenth centuries, characterized by a plain exterior and elaborately tooled doublures.

The London bindery of W. Root & Son consistently turned-out excellent work, both on fine bindings as here, and on trade bindings and sets. Packer lists the firm in business in Red Lion Square in 1899-1901, and the December 1942 issue of The Rotarian notes with regret that W. Root had been bombed out (uprooted?) of their premises on Paternaster Row during the 1941 Blitz. There is a record in the June 10 1905 issue of The Academy "Esteemed Editions of various Authors, some scarce, all in new extra leather bindings... W. Root & Son, 29-30 Eagle Street, Red Lion Street, Holborn, W.C." Root & Son are also recorded at the same address in The Literary Year-Book, 1909 (thirteenth annual volume). The British Library have five examples of bindings by Root & Son.

George Meredith (1828-1909) was an English novelist and poet of the Victorian era who was nominated for the Nobel Prize in Literature seven times. He poetry was particularly influenced by John Keats and Alfred Lord Tennyson. His writing was characterized by a fascination with imagery and indirect references. He had a keen understanding of comedy and his Essay on Comedy (1877) is still quoted in most discussions of the history of comic theory. In The Egoist, published in 1879, he applies some of his theories of comedy in one of his most enduring novels. Some of his writings, including The Egoist, also highlight the subjection of women during the Victorian period. During most of his career, he had difficulty achieving popular success. His first truly successful novel was Diana of the Crossways published in 1885. His first big novel, The Ordeal of Richard Feverel, was judged so shocking that Mudie's circulating library canceled an order of 300 copies. Meredith was richly honored: he succeeded Lord Tennyson as president of the Society of Authors, and in 1905 he was appointed to the Order of Merit by King Edward VII.

"Under yonder beech-tree single on the green-sward,
Couched with her arms behind her golden head,
Knees and tresses folded to slip and ripple idly,
Lies my young love sleeping in the shade." (Love in the Valley by George Meredith)

George Macaulay Trevelyan, OM CBE FRS FBA, (1876-1952) was a British historian and academic. He was a Fellow of Trinity College, Cambridge from 1898 to 1903. He then spent more than twenty years as a full-time author. In 1906 he published The Poetry and Philosophy of George Meredith - a personal acquaintance of the author.

Carl Emery Malugin (1891-1952) was born in Montana and around 1920 relocated to San Francisco. He was a scholar of literature and commissioned several very fine and elaborate inlaid bindings from the London bookbinder W. Root & Son. He studiously read his books and often annotated them in pencil. He also had Root & Son bind in several extra leaves on which he had affixed relevant clippings. (Inventory #: 04467)
$6,500.00 add to cart or Buy Direct from
David Brass Rare Books
Share this item