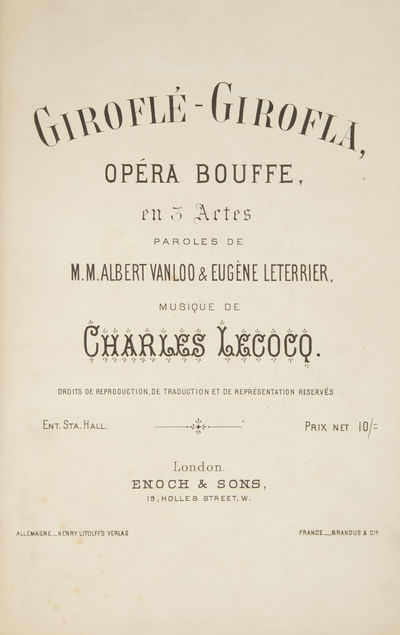 Giroflé-Girofla, to a libretto by Vanloo and Leterrier, was first performed in Brussels at the Fantaisies-Parisiennes on 21 March 1874.

"In Brussels, where Lecocq lived for several years from 1870, the popular acclaim accorded his operettas Les cent vierges (1872), La fille de Madame Angot (1872) and Giroflé-Girofla (1874), all of which were later produced with great success in Paris and abroad, established him as a natural successor to Offenbach..."

"Much of Lecocq's music is characterized by a light touch, but he could also adopt a more lyrical and elevated style than Offenbach and termed several of his operettas opéras comiques. His greatest popular triumph, La fille de Madame Angot, has remained a classic among operettas, and demonstrates Lecocq's abundant flow of pleasing melodies, his deft exploitation of rhythm for a lively theatrical effect, impressive building up of extended numbers, and typically French shaping of phrases." Andrew Lamb in Grove Music Online. (Inventory #: 28583)
$125.00 add to cart or Buy Direct from
J. & J. Lubrano Music Antiquarians
Share this item

1804
(click for more details about Manuscript collection of over 20 pieces, mostly from English operas, most for voice and keyboard, some for keyboard solo)
View all from this seller>