A collection of several relations & treatises singular and curious, of John Baptista Tavernier, Baron of Aubonne. Not printed among his first six voyages. Divided into five parts, viz. I. A new and singular relation of the kingdom of Tunquin, with several figures, and a map of the countrey. II. How the Hollanders manage their affairs in Asia. III. A relation of Japon, and the cause of the persecution of the Christians in those islands; with a map of the countrey. IV. A relation of what passed in the negotiation of the deputies which were at Persia and the Indies, as well on the French King's as the Company's behalf, for the establishment of trade. V. Observations upon the East India trade, and the frauds there subject to be committed. Published by Edmund Everard, Esquire 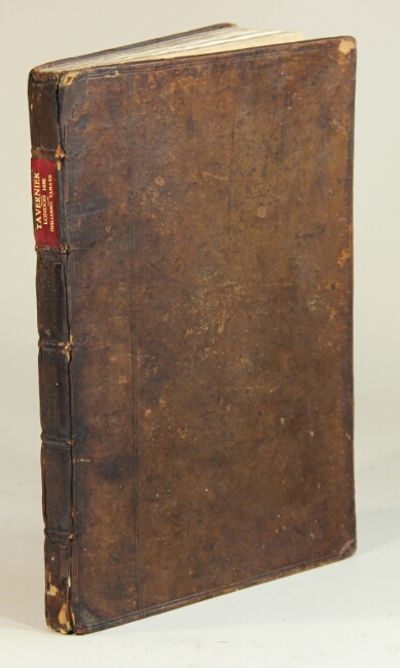 by Tavernier, John Baptista
London: printed by A. Godbid and J. Playford, for Moses Pitt at the Angel in S. Paul's Churchyard, 1680. First edition in English (originally published in Paris in French the previous year); folio, 2 parts in 1; pp. [22], 14, [4], 15-46, [4], 47-87, [1]; 66, [2]; collating [a]² b-e² chi1, B⁴ C⁴(C3+[chi]1,2) D-F⁴ G⁴(G3+[chi]1,2) H-M⁴, ²B-I⁴, ²K²; preliminary and terminal advertising leaves, 8 engraved folding plates, engraved folding map of Japan (with inset map of Tunquin), woodcut initials and ornaments; "A relation of Japon," (caption title) begins new pagination with quire B; contemporary full calf, later red leather label on spine; very good. A sequel, of sorts, to Tavernier's more famous Les Six Voyages de J. B. Tavernier (2 vols., Paris, 1676), containing an account of Japan, "gathered from merchants and others, and one of Tongking, derived from the observations of his brother Daniel, who had shared his second voyage and settled at Batavia; and it also contains a violent attack on the agents of the Dutch East India Company, at whose hands Tavernier had suffered more than one wrong" (Wikipedia). Wing T250. (Inventory #: 52717)
$5,175.00 add to cart or Buy Direct from
rulon-miller books
Share this item