Thesaurus Juridicus, Containing the Decisions of the Several Courts.. 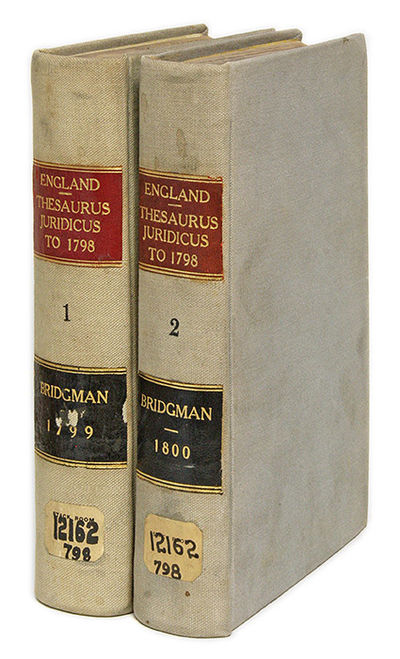 by Bridgman, Richard Whalley
1799. 2 vols. London, 1799-1800. 2 vols. London, 1799-1800. A Scarce Eighteenth-Century Digest Bridgman, Richard Whalley [1766?-1820], Compiler. Thesaurus Juridicus, Containing the Decisions of the Several Courts of Equity, Upon the Suits Therein Adjudged, And of the High Court of Parliament, Upon Petitions and Appeals: To Which are Added, The Resolutions of the Barons of the Exchequer in Matters Touching the Revenues of the Crown: From the Period of the Revolution to the End of Easter Term 1798; Systematically Digested. London: Printed by A. Strahan, 1799-1800. Two volumes. xx, 611, [1]; xiv, 588 pp. Octavo (9" x 5-3/4"). Later library cloth, red and black calf lettering pieces and paper location labels to spines. Some soiling and light shelfwear, a few minor chips to spine labels. Moderate toning, light foxing to Volume I, some soiling, early signatures and marks and later library stamps to title pages, library marks to versos. A scarce title. $1,000. * First edition. Bridgman never completed this highly detailed work, which begins with "Abatement" and ends with "Demise le Roi." It was highly regarded, however, and had a second edition in 1806. In Preston on Abstracts, the author notes, "had this work been completed, it would have formed one of the most useful books in the lawyer's library." OCLC locates 19 copies of the first edition, 9 in North American law libraries (Dalhousie, Harvard, Library of Congress, Southern Methodist University, University of Michigan, University of Maine, University of Minnesota, University of Pennsylvania, University of Washington). Preston cited in Marvin, Legal Bibliography 147. English Short-Title Catalogue T143881. (Inventory #: 68804)
$1,000.00 add to cart or Buy Direct from
Lawbook Exchange
Share this item

1928
(click for more details about The Paradoxes of Legal Science, Cardozo's Copy)