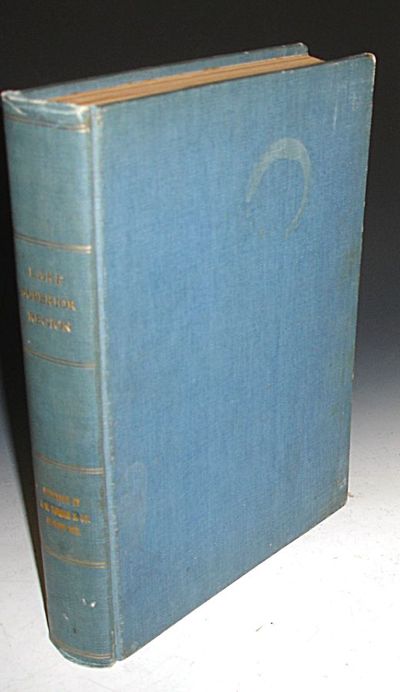 by Turner, Joseph M.
[Ashland, Wisconsin, J.M. Turner & Co., 1889). Folio. 86 leaves with 123 photographic images of the Lake Superior region in what has become the most desirable pictorial view of the entire area before the turn of the 20th century. As early as 1910 Lathrop Harper's rare book catalog noted it was known only as a privately printed work and quite costly presumably for a special presentation. This rare book is filled with photographs and reminiscences by the author of many sites associated with Lake Superior including Profile Rock a sea stack situated just off the north shore of Basswood Island. Profile Rock is associated with some interesting folklore and is now known as "Honeymoon Rock." A major surprise in reading this book was to find not only a few paragraphs (and a poem) about Steamboat Island but also its photograph as it stood in the Summer of 1888. Judging from the size of the individual scaling the summit (and hastening erosion), the elevation was approximately 20-25 feet above lake level at that time. From J. M. Turner's description of the island: "This is the smallest of the Apostle Islands and unlike any of the rest it is composed entirely of red clay on a stratum of limestone pebbles. It is so small and standing alone as it does, it would seem that one severe storm could wash it away. It is protected, however, by a wide pebbly beach on which the waves spend their fury before they reach the super strata of clay." Besides the Newberry Library, the other known 9 copies are in Michigan and Minnesota historical societies. The original Collotype photographs of the Lake Superior region in this volume, circa 1888, were made by Joseph M. Turner, Ashland, Wis. Images include landscape views in northern Wisconsin, northern Michigan, and islands and shores of Lake Superior. There are also images of the Chippewa Reservation at Odanah, Wis. The book measures 10" x 13 3/4" and weighs 9 pounds. Bound in light blue cloth, spine lettering gilt, edge rubbed, some soiling to spine and covers with a circular stain to upper board. A very good copy. (Inventory #: 025916)
$1,100.00 add to cart or Buy Direct from
ALCUIN BOOKS, ABAA
Share this item

Four Years in Rebel Capitals, with a Biographical Sketch of the Author By Louis De V. Chaudron (Author's autographed edition)

Shanghai : Commercial Press , 1935
(click for more details about The Li Sao, an Elegy on Encountering Sorrows Prefaces By H.A. Giles, Rabindranath Tagore; Chen Huan-chang)
View all from this seller>