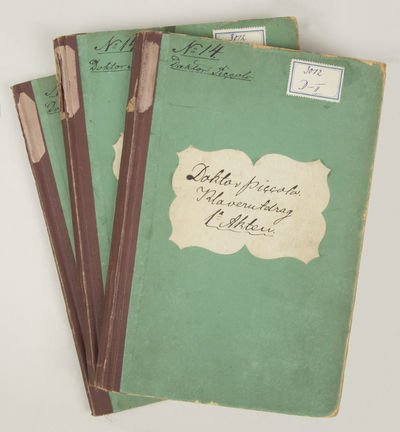 Heavily annotated in black ink, and lead, red, and blue pencil. With Swedish translation of French text overlaid in pencil and with corrections/alterations to notation and performance annotations in both pencil and ink in the same hand throughout. Manuscript music laid in to end of Act III being an alternative ending. Oval handstamp of the Swedish theatre publisher Arvid Enlind to several pages.

"Much of Lecocq's music is characterized by a light touch, but he could also adopt a more lyrical and elevated style than Offenbach and termed several of his operettas opéras comiques. His greatest popular triumph, La fille de Madame Angot, has remained a classic among operettas, and demonstrates Lecocq's abundant flow of pleasing melodies, his deft exploitation of rhythm for a lively theatrical effect, impressive building up of extended numbers, and typically French shaping of phrases." Andrew Lamb in Grove Music Online.