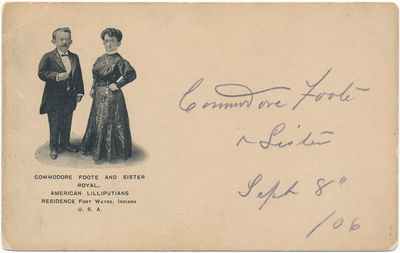 signed
by FOOTE, Commodore (Charles W. Nestel) (1848-1937)
This Indiana little person, together with younger sister Eliza S. Nestel (1857-1937), debuted together in 1861 and toured the country as "Commodore Foote and the Fairy Queen," once even performing for Queen Victoria; in February 1864 they met President and Mrs. Lincoln at a White House reception. PS, heavy stock 5½" X 3½", n.p., 8 September 1906. Very good. Faintly age toned, with quite minor edge wear. Preprinted postcard, on the verso of which is a tiny printed full-length portrait of Charles and Eliza Nestel standing side by side later in life, with printed caption beneath "Commodore Foote and Sister / Royal, / American Lilliputians / Residence Fort Wayne, Indiana / U.S.A." Images appears at left, and in blank area at right Nestel pencils large and bold "Commodore Foote / & Sister / Sept 8' / /06." The famed brother and sister retired to their hometown of Fort Wayne, Indiana and spent the remainder of their lives there, dying within months of each other. Very scarce in this form. General Tom Thumb (Charles S. Stratton) and Commodore Foote were by far the most famed midgets of the 19th century, and their autograph material is seldom seen. (Inventory #: 44018)
$495.00 add to cart or Buy Direct from
Main Street Fine Books & Mss.
Share this item