[ASCAP] "Questionnaire for Author and Composer." Printed document relative to Carter's composition Prelude, Fanfare and Polka for small orchestra, signed by the composer 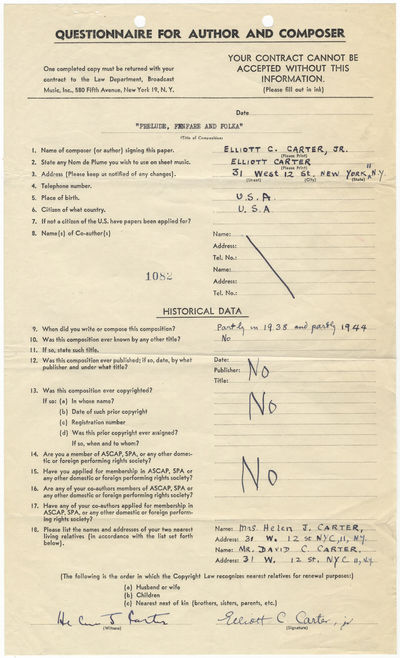 signed
by CARTER, Elliott 1908-2012
Folio. Completed in manuscript, in all likelihood by Helen Carter, the composer's wife. With the composer's full signature at foot. No date, but ca. 1945.

In addition to requesting basic information such as name, address, and nearest living relatives, the questionnaire asks about the composition itself. Most interestingly, in response to the question regarding date of composition, Carter answers "Partly in 1938 and partly 1944." Grove states that the work dates from 1938 and is unpublished.

Slightly worn and creased overall; creased at folds; small staple holes and two file holes to blank upper margin. "One of the most respected composers of the second half of the 20th century, [Carter] has blended the achievements of European modernism and American 'ultra-modernism' into a unique style of surging rhythmic vitality, intense dramatic contrast and innovative facture..."

"Although considered by many America's greatest composer after Copland's death, Carter remained a loner on the American musical scene, affiliated with no group or school and indifferent to the changing demands of fashion and the market place. He once commented that the most radical work an American composer could write would be one like Brahms's Fourth Symphony, which assumed the most highly developed musical culture in its listeners. By the time he entered his 90s, his inspiration undiminished, Carter had produced half a century of just such subversively refined masterpieces." David Schiff in Grove Music Online. (Inventory #: 30609)
$358.00 add to cart or Buy Direct from
J. & J. Lubrano Music Antiquarians
Share this item