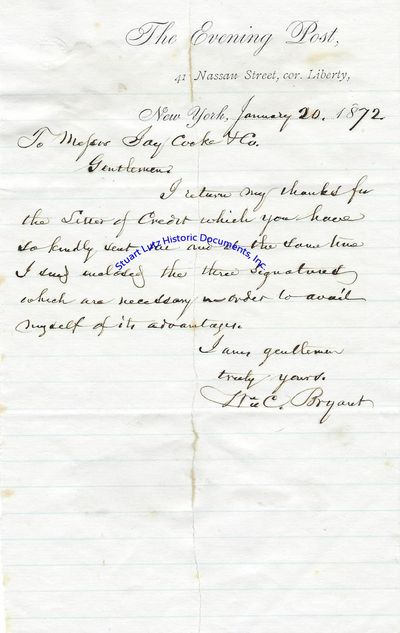 signed
by WILLIAM CULLEN BRYANT
WILLIAM CULLEN BRYANT (1794-1878). Bryant, a poet, is best remembered for “Thanatopsis”. He also spent time doing translations and was, for fifty years, the editor of the New York Evening Post. JAY COOKE (1821-1905). A prominent banker, Cooke helped finance the Civil War through the sale of bonds. After putting much of his money in railroads, the stock bubble burst, and Jay Cooke and Company failed. He soon began other ventures and recouped his fortune. ALS. 1pp. 5” x 8”. January 20, 1872. New York. An autograph letter signed “W.C. Bryant” to “Messrs Jay Cooke & Co.” about a loan: “I return my thanks for the Letter of Credit which you have so kindly send me and at the same time I send enclosed the three signatures which are necessary in order to avail myself of its advantages.” The letter has dark writing and white paper. The letter is backed to a larger sheet and is neatly separated down the middle, though the separation does not affect the signature. (Inventory #: 4466)
$250.00 add to cart Available from
Stuart Lutz, Historic Documents, Inc.
Share this item