Varina Davis, Writing For Jefferson, States “I Had Shipped To You From New York Some Books Which I Recollected You Desired To See…Genl Winfield Scott’s Book Was One Of Them & Buchanan’s Administration Was Another” 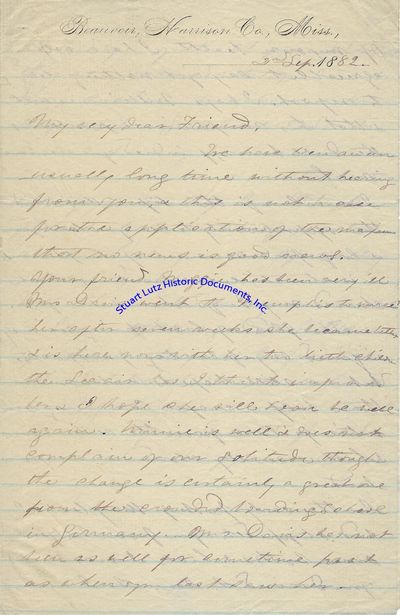 signed
by VARINA DAVIS
JEFFERSON DAVIS (1808-1889). Davis was a Senator from Mississippi, Secretary of War and President of the Confederate States of America. VARINA DAVIS (1826-1906). The wife of Confederate President Jefferson Davis, Varina was a powerful partner for her husband. After the war, she helped him write his memoirs and, after his death, she carried on his memory. ALS. 3pg. 7” x 9”. September 2, 1882. Beauvoir. An autograph letter signed “Jefferson Davis” but completely in the handwriting of his wife, Varina. Davis wrote to an unnamed correspondent: “We have been an unusually long time without hearing from you, & that is not a case for the application of the maxim that no news is good news. Your friend Maggie has been very ill. Mrs. Davis went to Memphis to nurse her – after seven weeks she became better & is here now with her children the sea air has I think improved her & I hope she will soon be well again. Minnie is well & does not complain of our solitude though the change is certainly a great one from the crowded boarding school in Germany. Mrs. Davis has not been as well for sometime past as when you last saw her. Of my own health I have nothing agreeable to say yet nothing alarming to report. I hope William is with you & that his companionship relieves the dull hours, if indeed you ever have such. I am always thankful that I had the opportunity to see you last year & long for a renewal of the pleasant & instructive conversations which cheered my days when with you. The flood of last spring seriously injured my planting prospects, but we still hope to make more than half a crop. Corn being an entire failure upon the cut worms which usually about in unplowed land. In the early part of May last I had shipped to you from New York some books which I recollected you desired to see. As I never advised you of the shipment I hope they were received & that you did not know to whom to make an acknowledgment. Genl Winfield Scott’s book was one of them & Buchanan’s administration was another both bearing on some of Jere Black’s statements & touching questions about which you are specially informed. With the united love of our household. I am with regards to Williams if he is with you & to good Marie who I take it will never leave you, as ever Your devoted friend Jefferson Davis”. The letter is on “Beauvoir” letterhead and the paper has light blue lines. Some of the purple ink is fainter than other parts, and the letter is in fine condition. (Inventory #: 4486)
$800.00 add to cart Available from
Stuart Lutz, Historic Documents, Inc.
Share this item