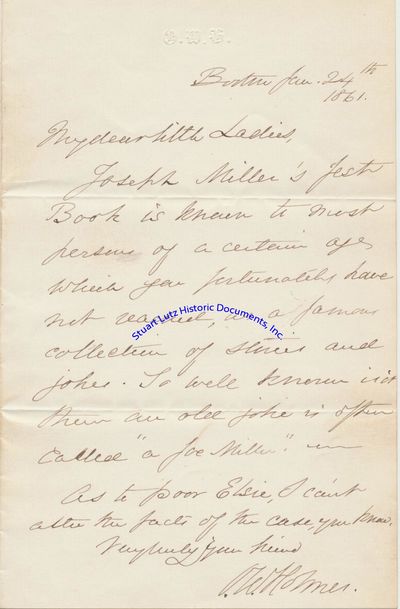 signed
by OLIVER WENDELL HOLMES
OLIVER WENDELL HOLMES (1809-1894). Trained as a physician, Holmes gained fame and position through both his medical and literary writings. He penned “Old Ironsides”, “The Chambered Nautilus,” and “The Autocrat at the Breakfast Table.” ALS. 1pg. 5” x 7”. January 24, 1861. Boston. An autograph letter signed “O.W. Holmes” to “My dear little Ladies”: “Joseph Miller’s jest book is known to most persons of a certain age which you fortunately have not reached, as a famous collection of stories and jokes. So well known is it that an old joke is often called a ‘Joe Miller’. As to poor Elsie, I can’t alter the facts of the case, you know. Very truly your friend O.W. Holmes”. Joe Miller was a popular English comic actor from 1709 until his death in 1738. A year after his passing, the publisher T. Read enlisted a down-and-out writer named John Mottley to compile a book of jokes, and stuck Miller’s name onto it. The letter has two mailing folds and is in fine condition. (Inventory #: 4469)
$300.00 add to cart Available from
Stuart Lutz, Historic Documents, Inc.
Share this item