Robert Hallowell Richards Writes About George Westinghouse: “Mr. Westinghouse Expressed A Desire To Try Our Wheel With His New Motor Believing That What Was Said Of The Wheel Was True That With One Motor & These Wheels He Would Be Able To Make A Showing Of Great Importance” 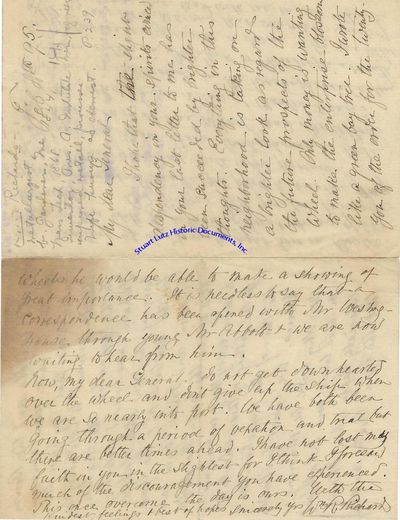 signed
by ROBERT HALLOWELL RICHARDS
ROBERT HALLOWELL RICHARDS (1844-?). A famous metallurgist, Richards was head of the M.I.T. mining engineering department, as well as president of the American Institute of Mining Engineers. GEORGE WESTINGHOUSE (1846-1914). By twenty, Westinghouse had invented a device for replacing derailed railroad cars, and another that enabled track switching. In 1868, he patented his famous air brake. He created hundreds of inventions and organized more than fifty companies. Autograph Letter Signed. 4pp. 4” x 6”. Feb 8, 1895. An autograph letter signed “Wm R Richards” to an unnamed general. Richards penned: “I hope the slight despondency in your spirits evinced in your last letter…Everything in this neighborhood is taking on a brighter look as regard to the future prospects of the wheel. Only money is wanting to make the enterprise blossom like a green bay tree. I wrote you of the order for the twenty-eight wheels and the Bemis Car Box Co have since communicated to me that they have sent the order forward to A Whitney & Sons. In the meanwhile, the steamer ‘Indan’ arrived yesterday bringing the new style of wheel for the Newston St. Ry & the Lynn & Boston and Frank Caggin has been after the brake show people to have everything in readiness for the fitting of these wheels to the cars of the respective companies. We expect by Monday next they will be running on these lines and I shall feel especially happy when I know that the Lynn & Boston car or cars are traveling up Sudbury St. right here in Boston. I expect this will be a turning point for us of some moment. But for your still greater encouragement I want to make you party to another ray of light that gleamed with good promise. Perhaps you know George Westinghouse. Well, he has heard of our wheel and Mr. Abbott’s brother, who as son-in-law of Charles Francis Adams is interested in the Westinghouse Company, met him either in New York or Philadelphia recently. Mr. Westinghouse expressed a desire to try our wheel with his new motor believing that what was said of the wheel was true that with one motor & these wheels he would be able to make a showing of great importance. It is needless to say that a correspondence has been opened with Mr. Westinghouse through young Mr. Abbott & we are now waiting to hear from him. Now, my dear General, do not get down hearted over the wheel and don’t give up the ship when we are so nearly into port…once overcome, the day is ours…”. The letter has a slight brown patch to the last page, but is in fine condition overall with dark ink. A fine letter linking Richards and Westinghouse. (Inventory #: 4447)
$125.00 add to cart Available from
Stuart Lutz, Historic Documents, Inc.
Share this item