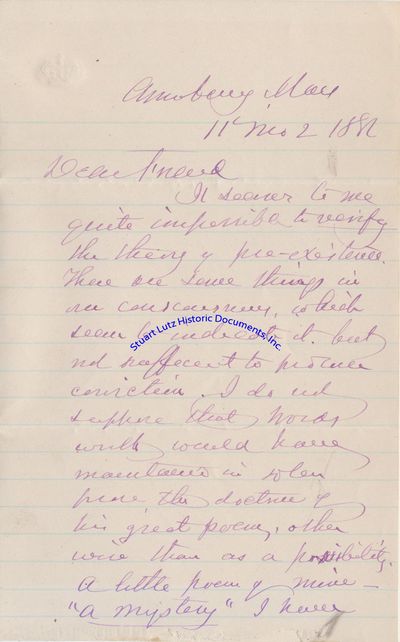 signed
by JOHN GREENLEAF WHITTIER
JOHN GREENLEAF WHITTIER (1807-1892). Whittier’s best known poems attacked slavery, and others praised the charms of New England country life. ALS. 2pg. 5” x 8”. November 2, 1886. Amesbury, Massachusetts. An autograph letter signed “John G Whittier” to an aspiring poet, Israel Jordan, and writing out stanzas from his poem “Mystery”: “It seems to be quite impossible to verify the theory of pre-existence. There are some thing in our consciousness which seem to indicate it, but not reflect to procure correction. I do not suppose that Wordsworth would have maintained in…the doctrine of his great poems – otherwise than as a possibility. A little poem of mine – ‘A Mystery – I have described a feeling common I believe in all: ‘A presence, strange at once and known, Walked with me as my guide; The skirts of some forgotten life, Trailed noiseless at my side. Was it a dim-remembered dream? Or glimpse through aeons old? The secret which the mountain kept The river never told.’ I regret that illness & preoccupation prevent me from writing more than this brief note. The subject is one of real interest.” The purple ink is a little light, the second page has some toning and the bottom edge has chipping that affects no words; the condition is very good. (Inventory #: 4476)
$250.00 add to cart Available from
Stuart Lutz, Historic Documents, Inc.
Share this item