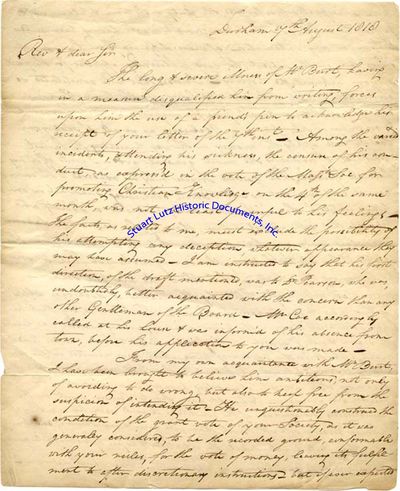 signed
by JEDIDIAH MORSE
JEDIDIAH MORSE (1761-1826). Morse was an American theologian and geographer. He helped establish Andover Theological Seminary in 1808. He was also the father of Samuel F. B. Morse, of telegraph fame. Letter. 3pg. 8 ¼” x 10 ½”. 7th August 1818. Durham, NH. A letter addressed to “Rev. Jedidiah Morse D.D.” and signed by “Jonathan Steele”. Steele was writing on behalf of a “Mr. Burt”, a minister in Durham who had been censured by the Massachusetts Society for Promoting Christian Knowledge, of which Morse was Secretary. The letter reads: “The long + severe illness of Mr. Burt, having in a measure disqualified him from writing, forces upon him the use of a friend’s pen…the censure of his conduct…was not the least painful to his feelings. The facts…must exclude the possibility of his attempting any kind of deception, whatever appearance they may have assumed – I am instructed to say that his first direction…was to Dr. Pearson [Eliphalet Pearson (1752-1826), another founder of Andover Theological Seminary], who was, undoubtedly, better acquainted with the concern than any other…From my own acquaintance with Mr. Burt, I have been brought to believe him ambitious… of avoiding to do wrong…He unquestionably construed the condition of the grant vote of your Society…to be the recorded ground…for the vote of money, leaving its fulfilment to after discretionary instructions…Such assignment never having been made to him…he very naturally applied for the fruits of your acknowledged bounty…greater service may be rendered…by Mr. Burt’s continuing steadfast in one place until he has, with Divine Aid, established a Society and Church…he has done every thing, in the power of man, among us…without even dreaming of the necessity of crediting himself in a journal with missionary services. Should your Society, however, insist on the punctilious performance of the condition, it would seem less a matter of personal concern with Mr. Burt, than with you + our Societies…”. The letter is in good condition. The are minute tears along the mailing folds and margins, and a small hole on the third page from the sealing wax. (Inventory #: 4462)
$150.00 add to cart Available from
Stuart Lutz, Historic Documents, Inc.
Share this item