A Humorous Bret Harte Letter, Mocking His Wife’s Obsessive Behavior: “Mrs. Harte, Who Has An Unpleasant Way Of Going Through My Luggage Like A Customs House Officer, Turned To Me With Chilling Deliberation And Said ‘Frank, What Have You Done With The Brush And Comb You Took With You?’ I Pointed Triumphantly To The Bureau Where They Lay” 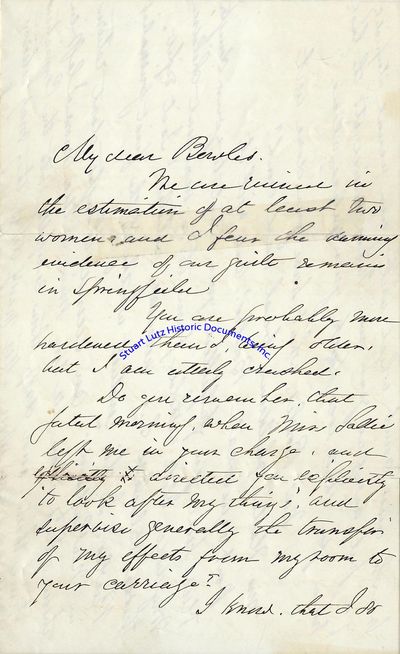 signed
by BRET HARTE
BRET HARTE (1836-1902). An American author and Western short story writer, he is best remembered for “The Luck Of Roaring Camp” and “The Outcasts Of Poker Flat.” ALS. 4pg. 5” x 8”. No date. No place. An autograph letter signed “Bret Harte” to Mr. Bowles concerning Mrs. Harte: “My dear Bowles, We are ruined in the estimation of at least two women, and I fear the damning evidence of our guilt, remains in Springfield. You are probably more hardened than I, being older, but I am entirely crushed. Do you remember that fatal morning when Miss Sallie left me in your charge, and directed you explicitly to look after my things, and supervise generally the transfer of my effects from my room to your carriage? I now that I so understood it, and discharged myself of all responsibility, and thereafter devoted myself to aesthetics and the picturesque Miss Sedgewick, with all the abandonment of a poetic nature unfettered by luggage and untrammeled by forms. But when I got home last night, Mrs. Harte, who has an unpleasant way of going through my luggage like a customs house officer, turned to me with chilling deliberation and said ‘Frank, what have you done with the brush and comb you took with you?’ I pointed triumphantly to the bureau where they lay. Mrs. Harte looked at me a moment, and then said with great naivete ‘you insensate idiot – I mean the nursery brush and comb, which with your usual stupidity you put away as your own. Never mind, it’s the last time you shall every pack your valise alone.’ Now, Bowles, what have you done with Mrs. Harte’s children’s brush and comb? Don’t equivocate Bowles! Out with it! How have you fulfilled your trust to your daughter? Why do you still withhold from these innocent children those valueless but necessary articles? Is it right, Bowles? Is this conduct worthy of the first journalist in New England? On second thought, don’t return them. Don’t above all let Miss Sallie know I left them. Find them and drop them carefully into the Connecticut River where after many days they may return to e. There is a duster missing, also a copy of Henri Murger’s ‘Vie De Boheme’ a thick squat novel. Please don’t return them. But bury them where you find them. Mrs. H. won’t know I’ve lost the, cause Ms. Sallie mustn’t. Be gentle and considerate, Bowles. Your careless friend Bret Harte PS Mrs. H says I had an overcoat with me. Did I?”. Samuel Bowles was an American journalist, and he was the editor of Massachusetts’s Springfield Republican. The letter is written on two separate sheets of paper; there are professional tape restorations to strengthen the folds. The ink is dark. A fine and humorous Harte letter. (Inventory #: 4487)
$600.00 add to cart Available from
Stuart Lutz, Historic Documents, Inc.
Share this item