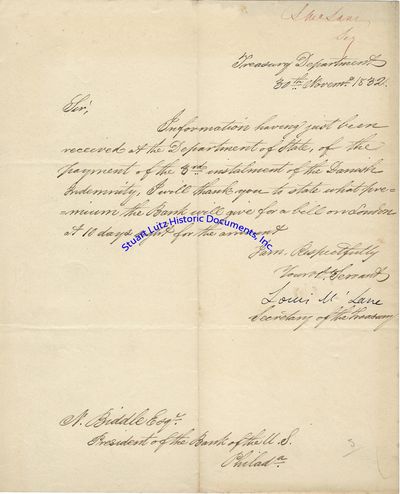 signed
by LOUIS McLANE
LOUIS McLANE (1786-1857). McLane was a Congressman and Senator from Delaware, and served as Secretary of the Treasury, Secretary of State, and Minister to the United Kingdom. NICOLAS BIDDLE (1786-1844). Biddle was president of the Second Bank of the United States, serving in that position from 1822 to 1836. During his tenure as President of the Bank, he managed it wisely and fostered a pattern of prudent growth. However, the 1832 Presidential election brought him into direct confrontation with President Andrew Jackson who, in his Inaugural Address brought into question the bank’s ability to create and maintain a sound and uniform currency. Biddle’s reaction was an unsuccessful attempt at rechartering the bank four years prior to the charter's expiration date. Upon expiration of the Bank's charter in 1836, Biddle rechartered the bank in Pennsylvania as the Bank of the United States of Pennsylvania, serving the same function as the old bank. He served as its president from 1836 to 1839. LS. 1pg. 8” x 10”. November 30, 1832. Treasury Department. A letter signed “Louis McLane” as Secretary of the Treasury to Nicholas Biddle, the President of the Bank of the United States. Secretary McLane wrote about the Danish Indemnities: “Information having just been received at the Department of State, of the payment of the 3rd installment of the Danish Indemnity, I will thank you to state what premium the Bank will give for a bill on London at 10 days sign for the amount.” The Danish Indemnities arose out of the Napoleonic Wars, when Dutch ships seized American vessels on the high seas. In 1826, the two countries signed a treaty of friendship in 1826, and in 1830, they signed a treaty related to the “Dutch Indemnities”. These were to pay American ship owners harmed by Dutch actions two decades earlier. The document has light staining to the right margin and the usual mailing folds, and is in fine condition. (Inventory #: 4495)
$350.00 add to cart Available from
Stuart Lutz, Historic Documents, Inc.
Share this item