Chemistry, Inorganic and Organic: With Experiments 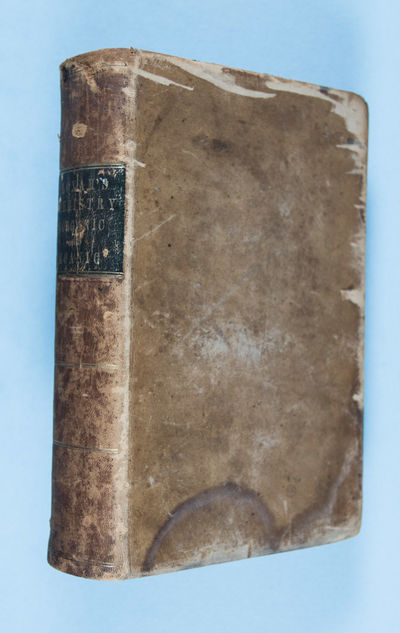 by Bloxam, Charles Loudon
Philadelphia: Henry C. Lea, 1873. From the second revised English edition. Hardcover. g- to vg. Small Quarto. xxxi (i), 33-700, 32pp. original calf with gilt lettering on black label of spine. Brown edges. Publisher's device on title page. With two hundred and ninety-five in-text illustrations. Major work of the period on inorganic and organic chemistry with extensive chapters on chemistry of the non-metallic elements and their compounds, Chemistry of the metals, and organic chemistry. "This work is designed to give a clear and simple description of the elements and their principal compounds, and of the chemical principles involved in some of the most important branches of manufacture." (Preface to first edition). "During the five years which have elapsed since the publication of the First Edition of this work, the adoption of the atomic system of notations has become so general among English chemists that I have felt obliged to employ it in the present edition. (Preface to second edition). Contains index and 32 pages of Henry C. Lea's Classified Catalogue of medical and surgical publications at rear. Binding with some scuffing along edges and spine, some staining at lower front and back cover. Some offsetting of leather binding to endpapers and following few pages. Front free endpapers with wear along lower and foredge. Previous owner's name inked to front free endpaper. Binding in overall good-, interior in very good condition. (Inventory #: 44279)
$375.00 add to cart or Buy Direct from
Eric Chaim Kline Bookseller
Share this item