Mr. Britling Sees It Through 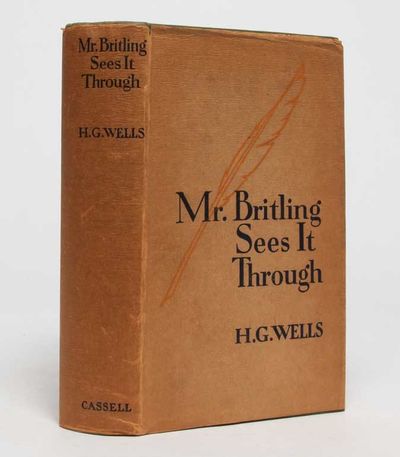 by Wells, H. G.
London: Cassell and Company Ltd, 1916. First Edition. Fine/Near Fine. A Fine copy of the book, extremely clean and bright on account of the original dust jacket. Dust jacket Near Fine with only trivial signs of use and age. A work from Wells' middle career period, when his novels became "discussions of social or political themes that showed little concern for the novel as a literary form...Mr. Britling Sees it Through, though touched by the prejudice and short-sightedness of wartime, gives a brilliant picture of the English people in WWI. World War I shook Wells' faith in even short term human progress, and in subsequent works he modified his conception of social evolution, putting forward the view that man could only progress if he would adapt himself to changing circumstances through knowledge and education" (Britannica). In this sense, the novel marked a major shift in Wells' career. Fine in Near Fine dust jacket. (Inventory #: 2361)
$500.00 add to cart or Buy Direct from
Whitmore Rare Books
Share this item