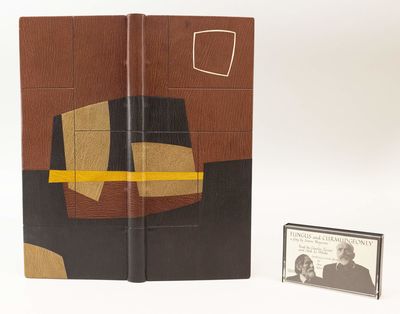 by (BINDINGS - CLEMENTS). MEYERSON, SIMON. NATALIA D'ARBELOFF, Illustrator and Designer
London: NdA Press, 1980. No. 4 OF 10 COPIES SPECIALLY BOUND BY DESIGNER BOOKBINDERS, from an edition of 50 copies signed by the author and artist. 315 x 130 mm. (12 3/8 x 5"). 35, [1] pp., [4] leaves. Calligraphed text in red and black written out by Sally Johnson on a unique vellum copy, and photo-lithographed on BFK Rives paper for this edition. No. 4 OF 10 COPIES SPECIALLY BOUND BY DESIGNER BOOKBINDERS, from an edition of 50 copies signed by the author and artist. STRIKING MULTI-COLOR MOROCCO, INLAID IN AN ABSTRACT DESIGN, BY JEFF CLEMENTS, covers and spine with wrap-around design composed of brown, black, taupe, and citron morocco with geometric blind rules and a quadrilateral tooled in white on the upper cover, DARK GREEN MOROCCO DOUBLURES tooled with a blind geometric design, tan suede endleaves. In a custom gray cloth drop-back box with niche for the accompanying cassette tape. Patterned flyleaves, frontispiece, and six double-page etchings by Natalia d'Arbeloff. With a cassette tape recording of a reading of the play by Charles Turner and Jack LeWhite. A typed letter signed by binder Jeff Clements and a photocopied review of the Designer Bookbinders exhibit in which this binding appeared laid in. In mint condition. Despite the vaguely unpleasant title, this is a notable and obviously extremely limited artist's book, offered here in a striking binding that is distinctly tall and narrow, with design elements inspired by events in the text, a dramatic dialogue between a "Shakespearean Superstar and his Understudy." According to the binder's letter to Professor John Burton, the original purchaser of the binding, "The design is very much based on the narrative itself with references to blindness as in the blind sun in white within the incised leather; the play takes place in a sewer, also evident, and the lower corner on the back cover is a hint about the mule which appears on the last pages of the play." (Perhaps these plot elements are not as compelling as "King Lear," but they certainly are curious.) Clements notes further that the binding was completed in 1981 and exhibited in a Designer Bookbinders show, and he has enclosed a copy of a review of that show, underlining the portion where the critic compares this binding to the paintings of British artists William Scott and Ben Nicholson. Clements (b. 1934) studied at the Plymouth College of Art and Design, receiving the National Diploma in Design in 1955, and continued his education in bookbinding at the Central School of Arts and Crafts. He became a fellow of Designer Bookbinders in 1957, and served as the organization's president from 1981 to 1983. Since 1988, he has been based in Amsterdam, where he operates Binderij Meridiaan with Katinka Keus. British-American artist Natalia (or Natalie) d'Abeloff is a painter, printmaker, book-artist, cartoonist and teacher, but is best known for her livres d'artiste, copies of which are held by institutions including the Rijksmuseum, the Victoria and Albert Museum, and the Library of Congress. The present work represents an early venture into multimedia works, an area she has continued to explore in the digital age, creating a "Bloggers' Parliament" and authoring a popular web comic. Jerry Jenkins, Curator of Contemporary British Published Collections at the British Library, notes the many ways the various elements of Abeloff's books--paper, print, illustrations--and the techniques she employs give her works appeal to a number of senses on a number of levels. With "Fungus and Curmudgeonly," he was impressed by the impact of being able to follow the text while hearing actors perform the roles, noting that "this offers an aural immersion into the play along with the performance." She is a Fellow of the Society of Designer Craftsmen, and her papers are held by the V&A. (Inventory #: ST14910)
$7072.00 add to cart or Buy Direct from
Phillip J. Pirages Fine Books
Share this item