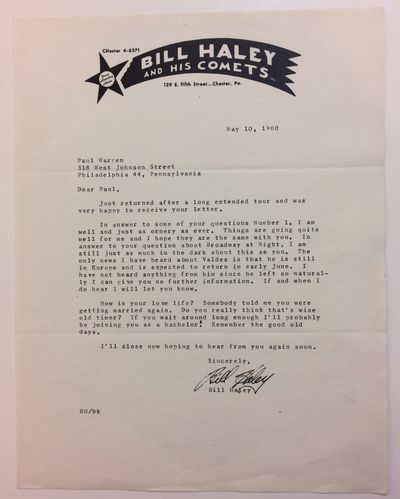 by HALEY, Bill (1925-1981)
Chester, PA, 1960. unbound. very good(+). Exceptional content T.L.S. 4to. 1 page, Bill Haley & His Comets custom letterhead, Chester, PA, May 10, 1960, to booking agent Paul Warren, in part: "...Just returned after a long extended tour and was very happy to receive your letter In answer to some of your questions... Things are going quite well for me and I hope they are the same with you. In answer to your question about Broadway at Night... I am still just as much in the dark as you. The only news I have heard about Valdez is that he is still in Europe and is expected to return in early June. I have not heard anything from him since he left so naturally I can give you no further information. If and when I do hear I will let you know. How is your love life? Somebody told me you were getting married again. Do you really think that's wise old timer? If you wait around enough I'll probably be joining you as a bachelor! Remember the good old days..." Note: "Valdez" refers to Haley's drinking buddy and fellow Decca artist and bandleader BeBo Valdez - an iconic figure in the incipient Afro-Cuban Jazz scene in Havana. At the time this letter was written, Valdez defected from Cuba to Mexico and then lived briefly with Haley in the United States before touring Europe, and eventually settling in Stockholm. Haley's remark about joining Warren as a bachelor turned out to be an understatement. His wife Barbara whom he married in 1952 and had five children with threw him out of the house in April 1960 due to his excessive alcoholism and secured a full divorce before Christmas. Fine condition. American singer-songwriter, musician and bandleader best known for popularizing rock-n-roll music in the early 1950's with his group The Comets. (Inventory #: 286403)
$700.00 add to cart or Buy Direct from
Argosy Book Store
Share this item

New England and New York in 1697; from the "Magnalia Americana