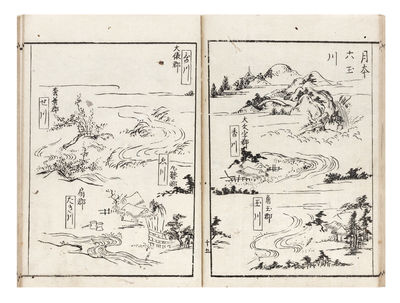 by SHIMIZU, Enju
One double-page woodcut illus. & numerous woodcut illus. in the text. 38 folding leaves. Small 8vo, orig. patterned wrappers (wrappers a little waterstained, some worming), orig. block-printed title label on upper cover, new stitching. Edo: Tsutaya Juzaburo, 1783. First edition and very rare; this work is a guidebook, with poetic and allusory reviews, to the courtesans and brothels of the Yoshiwara pleasure quarter in Edo. This district served "as a kind of cultural salon where samurai and townsman culture could interact, and the quarter was able to transmit this culture to a wider world thanks to burgeoning links with the publishing industry."-Ryoko Matsuba, "Shunga and the Floating World: The Yoshiwara Pleasure Quarter," in Shunga. Sex and Pleasure in Japanese Art (2013), p. 412. Our book was published by Juzaburo Tsutaya (1750-97), one of the period's most renowned publishers and a great discoverer of talent (most notably Utamaro), whose shop was located at that time outside the Great Gate of Yoshiwara. Tsutaya was acquainted with a number of leading writers and intellectuals and he engaged them to write books and prefaces for his publications. The four prefaces in this book were written by Shimizu, Nanpo Ota (using the pen-name "Yomo Sanjin"), Akera Kanko, and Kisanji Hoseido. Tsutaya grew up in Yoshiwara and was intimately familiar with the workings of the district; ultimately, he was the district's most important spokesman. He began his publishing career by issuing guides to the courtesans and brothels of Yoshiwara (the so-called Yoshiwara saiken) which enjoyed great success due to their thorough descriptions. By 1783, Tsutaya decided to change the format of these guides of which this is an early example. In this work, the top portion of most pages depicts a series of decorated lanterns, each signifying a prostitute by her name or symbol. There are unifying icons on groups of lanterns, signifying specific brothels (with the actual name of the brothel in the upper right hand corner of the page). They are arranged geographically within the quarter. There is a fine double-page illustration of six rivers ("rivers of love"), each a different landscape, with the names of a prostitute and her brothel. The rivers and landscapes, ranging from urban to rustic scenes, one with a waterfall, suggest the prostitutes' nature and skills. The text is filled with allusions to love, desire, and sex with references to certain prostitutes using varied and exquisitely elaborate words, kanbun poetry, kyoka poems, musical terms, etc. This might well be the final book at Tsutaya's original address before he moved to Nihonbashi. PROVENANCE: This copy belonged to Shikitei Sanba (1776-1822), the popular comic writer of the early 19th century. His seal is present on the title label on the upper cover and on the first leaf, with a note is his hand and another seal. Very good copy with some worming which we do not find offensive. (Inventory #: 6358)
$4950.00 add to cart or Buy Direct from
Jonathan A. Hill, Bookseller
Share this item
Jonathan A. Hill, Bookseller, Inc.
Offered by