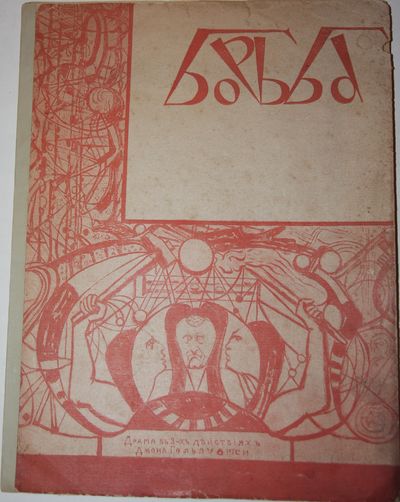 by Galsworthy, John. Translator: ?. ?????????? [L. Pokrovskoy]. Set designs: ???. ??. ???????? [Vasily Denisov]
Moscow: ????????????????? ???????, 1918. First Edition Thus. A scarce translation of a Galsworthy play about an union strike into Russian shortly after the Revolution. Folio. 34.5 by 26 cm. 76 pp. Four color mounted plates of Denisov's set designs. John Galsworthy, who won the Nobel Prize for Literature in 1932, is today remembered primarily for his novels and most particularly, the trilogy, "The Forsyte Saga", and other novels centering on the Forsyte family. Yet for much of his lifetime he was more celebrated for his plays, and "Strife", his third play, was his most successful. Given that many of his novels deal with the Upper Middle Class, there might be a mistaken impression that Galsworthy was fusty and hidebound, whereas his writings, including these very novels, tackled social inequities and other injustices with a strong progressive sensibility. Knowing that one can see that "Strife" was not an anomaly in Galsworthy's output, and further, one can understand the newly empowered Communist regime giving its nod to this play. The National Theatre voted this play one of thge 100 most influential of the 20th Century! Only copy we could locate in the West, via OCLC First Search, at the Library of Congress, as of November, 2018. Condition: rebacked with tape band. Pulp papers heavily age toned, as typical of Russian publications of this period. Some pages with dog ears. Rear cover with small corner chip, and foxing of this card-thick leaf. (Inventory #: 006210)
$2,500.00 add to cart Available from
White Fox Rare Books & Antiques
Share this item
White Fox Rare Books and Antiques
Offered by