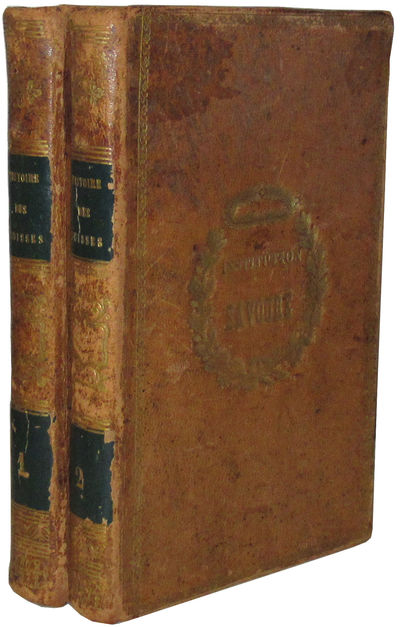 by Savagner, Auguste
Paris: Parent-Desbarres, 1841 Two volumes. First edition. Finely bound in tan calf, boards decoratively ruled in gilt, centrally stamped to front boards with Institution Savouré emblem in gilt, green calf spine labels lettered in gilt, blue marbled endpapers and text block edges. A very good set with some rubbing to extremities and wear to front hinges, light scattered foxing to both volumes, damp staining to outer edge of text block in Vol. I. Overall, a handsome set. This two-volume set includes a short history of both Switzerland and Bavaria. The text on Switzerland spans from the first year A.D. to the year 1829, and is separated into chapters that each cover a period of several years. Similarly, the text on Bavaria begins with a general summary of life before the fall of the Roman empire, with a more detailed description covering years 554 to 1820. Savagner, a historian, published several other historical works, including a history of the world. The Institution Savouré, whose stamp appears on this binding, was a Christian organization founded in 1729. The organization was intended to celebrate the achievements of young Christians, promoting personal and academic progress.. First Edition.. Hard Cover. Very Good. (Inventory #: ASA001)
$200.00 add to cart or Buy Direct from
B & B Rare Books
Share this item