1883 Condolence Letters Written to the Family of Albert Buice Concerning the drowning Death of Their Son, June 24, 1883 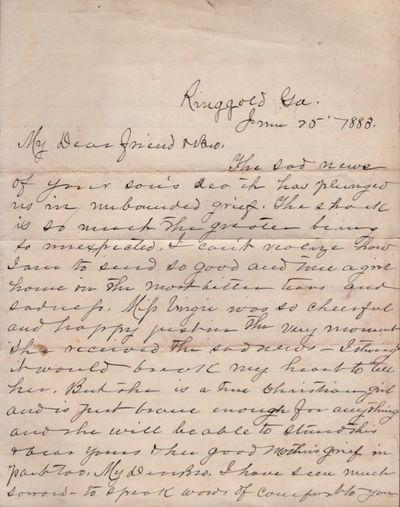 by [Buice Family]
Marietta, Georgia, 1883. Letters. Very good. Lot of 3 handwritten letters of condolences written to the Buice family. The first letter from Ringgold dated June 25, 1883 is 4 pages long and addressed to "Dear Friend & Bro." It is signed W. L. Laice (sp.?). The second letter written form Augusta, Georgia is dated June 29, 1883 and addressed, "Dear Bro & Sister Buice. It is 3 pages long and signed by Cadesman Pope. The third letter from Dadeville, Alabama is dated July 2nd, 1883. It is addressed to "Mrs. Buice and family." This letter is 8 pages long and makes references to LaGrange (Georgia). This letter also mentions the murder of the editor of the People's Advocate Dr. Carter, "Just two weeks ago my door neighbor was shot dead in tracks uptown. He was one of the nicest men I ever knew, except that he was not a Christian, he was a Physician here - was with Tillie and I both when we were sick not long ago. Was so refined well educated, a polished gentleman. Political disturbances was the origin of his death. He was editor of the People's Advocate published weekly at this place and had said something in the editorials that offended a young man 22 years old who walked up to him in the square and demanded a private interview, which Dr. Carter refused. Told him he had no business with him which could not be transacted there. Then young Sturdivant (or Sturdevant) drew out his pistol and shot him through the head." The letter is signed Mrs. Dansby. An article appearing in the Hazleton Sentinel and sourced from Columbus, Georgia June 18th states, "Dr. John F. Carter of Dadeville, Alabama was shot and killed in that place by B. B. Sturdivant, son of ex-Probate Judge Sturdivant, Saturday night. Carter had been making some severe strictures on Judge Sturdivant in his paper about which young Sturdevant called to see him yesterday. (Inventory #: 15352)
$150.00 add to cart or Buy Direct from Americana Books
Share this item

Personal Memoirs of U. S. Grant. Volume II only

by Iobst, Richard W. (history by); Manarin, Louis H.; Lucas, Wade (with a narrative on the reactivated regiment)