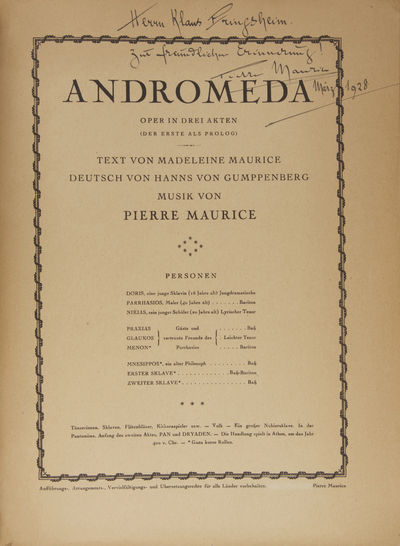 Andromède, to a libretto by M. Maurice after Seneca, was first performed in Basel on April 23, 1924.

A Swiss composer and student of Massenet, Maurice "was influenced by his teacher and by Fauré, but above all by Wagner, particularly in his operas... His work is characterized by formal perfection and a sensitive handling of instruments in music that is essentially contemplative... His synthesis of German and French traditions remains a valuable achievement." Pierre Meylan in Grove Music Online. (Inventory #: 29152)
$39.00 add to cart or Buy Direct from
J. & J. Lubrano Music Antiquarians
Share this item