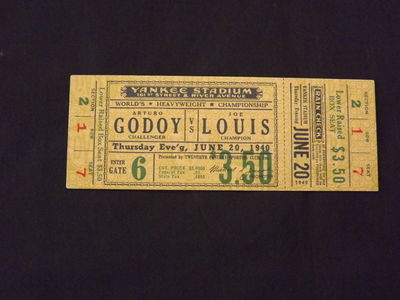 by [Louis, Joe].
Ticket, 2 1/4" x 6 1/8", in color, printed on both sides. Very slight corner bumps; near fine. This was the second fight between the two men, and while Louis won the first fight in January 1940, he looked sloppy and the rugged South American, Godoy, gave him quite a fight. This unused ticket was for the second fight on June 20, 1940 at Yankee Stadium. Louis put on a better show in this fight, and knocked out Godoy in the 8th round. (Inventory #: 106542)
$300.00 add to cart Available from
Nicholas D. Riccio, Rare Books
Share this item
Nicholas D. Riccio Rare Books & Prints
Offered by