The Assize of Bread. Together with sundry good and needfull ordinances for Bakers, Brewers, Inholders, Victualers, Vintners, and Butchers: And also other Assizes in Weights and Measures, which by the Lawes of this Realme, are commanded to bee observed and kept by all manner of Persons, as well within Liberties as without. Whereunto there are also added, sundrie good and needfull Orders, in making and retayling of all kinds of lawfull Breads, vendible vnto His Maiesties Subiects in the Common-wealth, agreeing with the Statutes, Lawes, and Ancient Orders and Customes of this Realme of England...Newly corrected and enlarged from twelve pence the Quarter of Wheate, unto three pound and sixe pence the Quarter, according to the rising and falling of the price thereof in the market by sixe pence altring in every Quarter of Wheate.. 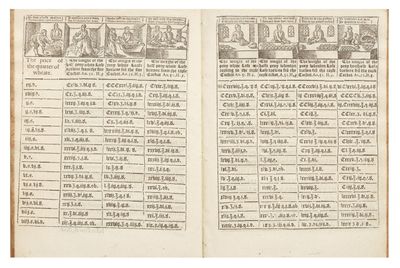 by (BREAD)
Numerous woodcuts in the text. 28 unnumbered leaves (incl. the first leaf, a blank). Small 4to, early 20th-cent. calf (final leaf with short tear in blank section, carefully repaired). London: W. Stansby for J. Grismand, 1626. A very rare book that describes the English bread-pricing regulations established in 1266, which remained in force, with modifications, for more than six centuries. As Britain's early modern economy developed and the price of wheat fluctuated, these regulations were periodically revised and reissued by authority of the Privy Council. ESTC locates only one copy of our edition in North America. "Bread was one of the basic nutritional elements of the medieval diet and its supply and price were of the utmost concern to local authorities. Consequently, well-defined laws were laid down to control the manufacture and sale of bread: to judge the weight, quality, and price, and also to ensure an open and constant supply. The most significant and long-lasting commercial law in medieval England was the assize of bread, which was entered into statute law sometime [1266] in the thirteenth century... "The assize of bread was one of the most widely enforced statutes in medieval England. Its principle was simple: a unit loaf would be sold at a constant price (usually a farthing or halfpenny) while its weight would vary according to changes in the market price of grain. As the price of corn increased, the size of the loaf would decrease and vice versa. This system of variable weight was employed throughout Europe from our earliest Carolingian source in AD 794 until the eighteenth century."-James Davis, "Baking for the Common Good: A Reassessment of the Assize of Bread in Medieval England" in Economic History Society, Vol. 57, No. 3 (August 2004), pp. 465-66-(& see the rest of this fine article). The theories of the "just price," formulated by Thomas Aquinas and Albertus Magnus in the 13th century when assize regulation was developing, continued to prevail in following centuries. The origins of the thinking behind the assize of bread, in which a retailer's profits were strictly controlled according to the level of the market price of grain, were consistent with medieval and early modern ideals of social structure, justice, and morality. This work contains 16 pages of assize tables, giving the different weights of half and wholes loaves made from different qualities of wheat. At the head of each column is a woodcut depicting the stages of baking bread. Fine copy. (Inventory #: 6534)
$18,500.00 add to cart or Buy Direct from
Jonathan A. Hill, Bookseller
Share this item
Jonathan A. Hill, Bookseller, Inc.
Offered by


(click for more details about Multiple World: An International Survey of Artists' Books)
View all from this seller>