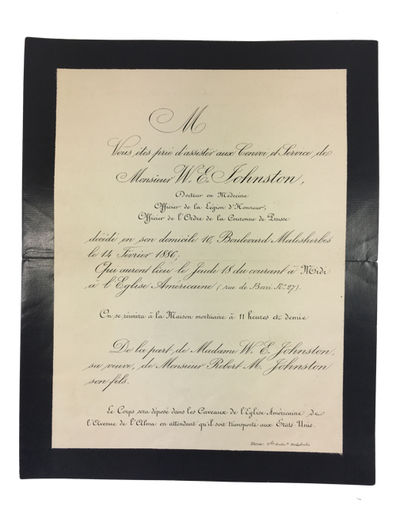 by Johnston, William Edwin, 1821-1886
Good. Johnston, born in Ohio and trained as a physician in New York City, practiced medicine in Paris (France) for many years. Two unsigned letters, both incomplete, appear to have been written by Dr. Johnston. One of those letters recounts harrowing experiences on board the Labrador on a voyage from Liverpool to New York in January of 1885 while , for a payment of $2000, he was acting as attending physician for a wealthy woman who hoped in vain to reach her family before succumbing to cancer. Most of the material, including some death notices, relates to Johnston's death in 1886 -- at least two of the death related letters are from Johnston's widow to her late husband's sister. The only photo present is a cabinet card photo of a young man identified and dated in ink on the back as Johnston's 18 year old son in 1885. (Inventory #: 86675)
$185.00 add to cart or Buy Direct from McBlain Books
Share this item

The Muqaddimah: An Introduction to History

New York : Pantheon Books , 1958
(click for more details about The Muqaddimah: An Introduction to History)