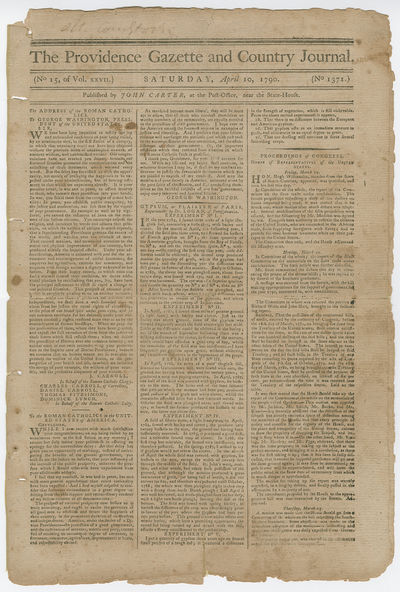 by [GEORGE WASHINGTON]
"As mankind become more liberal, they will be more apt to allow, that all those who conduct themselves as worthy members of the community, are equally entitled to the protection of civil government. I hope ever to see America among the foremost nations in examples of justice and liberality." [GEORGE WASHINGTON].
Newspaper. The Providence Gazette and Country Journal, "Letter to the Roman Catholics in America," ca. March 15, 1790, New York. Printed on the first page, April 10, 1790. Providence, Rhode Island: John Carter. 4 pp., 10⅛ x 15⅜ in.

To the ROMAN CATHOLICS in the UNITED STATES of AMERICA.

WHILE I now receive with much satisfaction your congratulations, on my being called by an unanimous vote to the first station in my country; I cannot but duly notice your politeness in offering an apology for the unavoidable delay: As that delay has given you an opportunity of realizing, instead of anticipating the benefits of the general government; you will do me the justice to believe, that your testimony of the increase of the public prosperity, enhances the pleasure which I should otherwise have experienced from your affectionate address.

I feel that my conduct, in war and in peace, has met with more general approbation than could reasonably have been expected: And I find myself disposed to consider that fortunate circumstance in a great degree resulting from the able support and extraordinary candour of my fellow-citizens of all denominations.

The prospect of national prosperity now before us is truly animating, and ought to excite the exertions of all good men to establish and secure the happiness of their country, in the permanent duration of its freedom and independence. America, under the smiles of a Divine Providence—the protection of a good government, and the cultivation of manners, morals and piety, cannot fail of attaining an uncommon degree of eminence, in literature, commerce, agriculture, improvements at home, and respectability abroad.

As mankind become more liberal, they will be more apt to allow, that all those who conduct themselves as worthy members of the community, are equally entitled to the protection of civil government. I hope ever to see America among the foremost nations in examples of justice and liberality. And I presume that your fellow-citizens will not forget the patriotic part which you took in the accomplishment of their revolution, and the establishment of their government: Or, the important assistance which they received from a nation in which the Roman Catholic faith is professed.

I thank you, Gentlemen, for your kind concern for me. While my life and my health shall continue, in whatever situation I may be, it shall be my constant endeavor to justify the favorable sentiments which you are pleased to express of my conduct. And may the members of your society in America, animated alone by the pure spirit of christianity, and still conducting themselves as the faithful subjects of our free government, enjoy every temporal and spiritual felicity.

George Washington received many messages early in his presidency from civic leaders, fraternal organizations, and the elders of a great diversity of religious congregations throughout America. Each offered congratulations, praise of his deeds in war, peace, and politics, prayers on behalf of their congregations or constituents, and more praise for what he would yet accomplish as president. Washington's replies justly count among his most famous pronouncements, setting a boldly inclusive tone that helped the new nation survive and expand.

On March 15, 1790, John Carroll on behalf of the Roman Catholic clergy, and Charles Carroll of Carrollton, Daniel Carroll, Thomas FitzSimons, and Dominick Lynch on behalf of the Roman Catholic laity, sent Washington an address, congratulating him on his election to the Presidency. "By example, as well as by vigilance," they wrote, "you extend the influence of laws on the manners of our fellow citizens. You encourage respect for religion, and inculcate by words and actions that principle, on which the welfare of nations so much depends, that a superintending Providence governs the events of the world, and watches over the conduct of men."

On November 14, 1789, John Carroll (1735-1815) had been selected to be the first Roman Catholic bishop by a convocation of clergy meeting in Maryland. He was consecrated in England on August 15, 1790. This address was one of his first official acts as leader of the Catholic Church in the new United States. His brother Daniel Carroll II (1730-1796) was one of only five men to sign both the Articles of Confederation and the Constitution. Their cousin U.S. Senator Charles Carroll of Carrollton (1737-1832) was the last surviving signer of the Declaration of Independence. Thomas Fitzsimons (1741-1811) was an Irish-born Philadelphia merchant who served in the Continental Congress and the U.S. Congress and signed the U.S. Constitution. Dominick Lynch (1754-18) was born in Ireland and immigrated in 1785 to New York, where he used his European connections to become a prominent merchant and a supporter of the Catholic Church in America.

This issue also includes proceedings of Congress for March 19-April 2 (p1/c3-p2/c1); a proposal for an American printing of the Bible with annotations (p3/c2-3); poetry (p4/c1); a notice to invalid pensioners of the United States as to where they could obtain a portion of their pension for 1790 (p4/c3); and a variety of other notices and advertisements.

One advertisement for "A Subscription for a Medal of General Washington" hoped to capitalize on Washington's popularity and reads, "Medals, from the earliest Period of Time, have been regarded by every enlightened People, as the greatest Help to History, and the best Method of transmitting to Posterity the Memory of Heroes and Patriots of the Age, and one of the most honorary Compliments a grateful People could confer on their Favourites. As the History of Mankind furnishes no Instance of a Hero or Patriot who has better deserved, or has been more justly entitled to the Affections or Esteem of a grateful People, than his Excellency the President of the United States—General GEORGE WASHINGTON—an Artist is induced to offer to the Citizens of America a Medal, with a striking and approved Likeness, and such Inscriptions or allegorical Figures as shall best suit so great a Character; and he humbly hopes to be honoured with their Patronage." The medal by artist J. Manly was available in white metal to resemble silver for $1, gold-colored metal for $2, fine silver for $4, or gold, "in Proportion to Weight." Designed by James Manly, a portrait painter and engraver, and produced by goldsmith Samuel Brooks of Philadelphia, the medal was first offered in that city by Manly in March 1790. It was the first medal issued in the United States with Washington's portrait. (p4/c2)

Also includes news from Barbados that the legislature there had passed a law entitled "An Act for making a better Provision for the personal Security of Slaves," a portion of which stated, "That from and after the Publication of this Act, whoever shall wantonly, wilfully, or bloody-mindedly kill and murder a Slave, shall be subject to the same Punishment, and be proceeded against in the same Manner, as if the said Offence had been committed on any free Person...." (p3/c1)