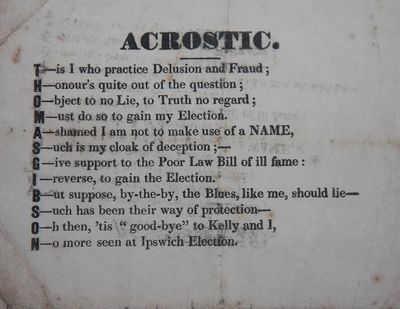 NA
NA. Good. Negative campaign flyer against Thomas Milner Gibson (1806-1884) who was a member of Parliament representing Ipswich, in Suffolk, from 1837 to 1839, as a Tory, and then Manchester, 1841-1857, as a Liberal. The flyer appears to be attacking Gibson on the basis of his switching his party loyalties, and so we would conjecture that it was created in his first race to gain the seat in Manchester, or 1841. But it could have come from when Gibson was running in Ipswich, perhaps in 1838, as it mentions "[Fitzroy] Kelly", the other Tory MP from Ipswich. Regardless, the item is a novel piece of electoral ephemera. Measuring 11 by 14 cm, oblong, and with some foxing and flattened dog-ear creasing. (Inventory #: 006268)
$100.00 add to cart Available from
White Fox Rare Books & Antiques
Share this item
White Fox Rare Books and Antiques
Offered by