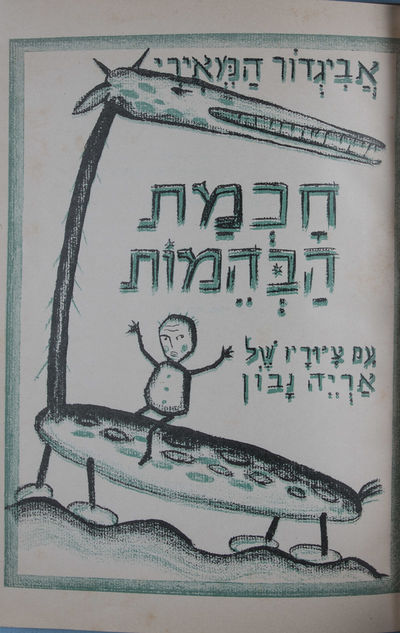 by Hame'iri Avigdor/ Navon, Aryeh (Illustr.)
Tel Aviv: Eretz, 1933. First edition. Hardcover. g. Quarto. 137pp. Original illustrated cloth with brown lettering on cover. Illustrated title page. Green ruling on each text page. Children's book with 43 short stories and 24 b/w full-page drawings on the wisdom of animals. The stories include one story on human beings while being a part of the animal world, a story on a lion, herds and flocks, a goose, dog, rabbit, fish, camel, donkey, horse, snake, elephant, mouse, swan, deer, giraffe, fox, parrot and the frog. The Israeli author Avigdor Hame'iri was born as Avigdor Feuerstein in 1890, in the village of Odavidhaza (near Munkatsch), Carpathian Ruthenia in Austria Hungary. He emigrated to Mandate Palestine in 1921 where he became one of the original 16,000 freedom fighters in 1948. He published the State's first independent newspaper and helped to organize the worker's bank. Hame'iri was the first poet to whom the title Israel's Poet Laureate was awarded. He died in Israel on April 3, 1970. Two years before, in 1968, Hame'iri was awarded the Israel Prize for Literature. Aryeh Navon painter, caricaturist and stage designer, born 1909, Russia. Immigrated 1919 to Israel. Caricaturist of newspaper, "Davar", 1933-64. Illustrated poetry and children's books and designed theatre sets. Died November, 1996. Navon is the first known cartoonist of Hebrew culture. Text in Hebrew. Binding with light wear, tanning and light bumps to edges. Foxing at the front and rear endpapers. Block with sporadic foxing and minor staining from page 15 to 22. Binding and interior in overall good condition. (Inventory #: 39523)
$450.00 add to cart or Buy Direct from
Eric Chaim Kline Bookseller
Share this item