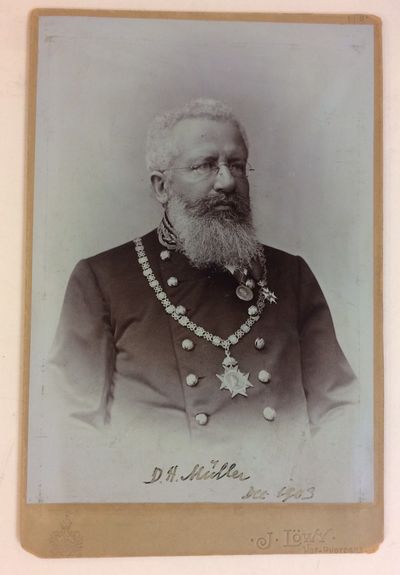 by MUELLER, David Heinrich (1846-1912)
Vienna, 1903. unbound. very good. Josef Lowy. Exceedingly rare signed cabinet photograph by Lowy, 4.25" x 6.25", depicting Mueller with full beard and glasses, attired in a military frock coat adorned with gold buttons, with the addition of a large filigree chain with honorarium medals, boldly signed beneath his image: "D.H. Mueller - Dec 1903". Austrian-Jewish Hebrew scholar, archaeologist and orientalist who, upon the discovery of the Code of Hammurabi, was the first to write of its relationship to the laws of the Pentateuch; translating the Code into biblical Hebrew, and to those of the Syrian-Roman Law Book. Mueller also wrote comparative studies of Semitic languages; on the Cuneiform writings discovered at Ashrut Dargha; and on the particular division of sibilants in the South-Arabians dialect. On his second expedition to South Arabia in 1888 he was able to make several significant linguistic and literary discoveries, enabling him to be elected a member of the Austro-Hungarian Academy of Sciences. In recognition of his many achievements he was ennobled under the title of Baron Mueller von Deham. (Inventory #: 288965)
$950.00 add to cart or Buy Direct from
Argosy Book Store
Share this item