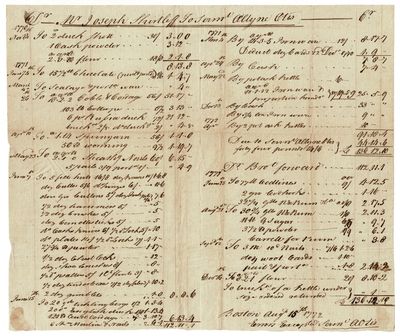 by Otis, Samuel A.
Boston: Aug. 15, 1772. Approx. 10" x 12" containing 2 columns of purchases showing debts and credits from Joseph Shirtleff, from Nov. 1770 to Dec., 1772. From 2 sacks of flour and 15½ pounds of chocolate to a dozen candlesticks, a barrel for rum, and three thousand 10-penny nails. Also the return of an undersized kettle. Nearly 50 items in all, with prices, and with payments made against the purchases with cash. Otis (1740-1814), son of James Otis and father of Harrison Gray Otis, graduated from Harvard in 1759; engaged in mercantile pursuits in Boston; was a member of the state House of Representatives in 1776; member of the Board of War in 1776; collector of clothing for the Continental Army in 1777; member of the Massachusetts Constitutional Convention; again a member of the state House of Representatives 1784-1787 and elected Speaker of the House in 1784; he was a member of the Continental Congress in 1787 and 1788; and was elected Secretary of the United States Senate on April 8, 1789, and served until his death in Washington, D.C. Joseph Shirtleff Quarter Master, Col. Thomas Marshall's (10th) regt.; Continental Army pay accounts for service from Jan. 1, 1777, to Sept. 1, 1777; reported promoted to Commissary General's department Sept. 1, 1777; also, same regt.; return of men who were in service subsequent to Jan. 1, 1777; reported transferred to Quartermaster General's department. (Inventory #: 53420)
$920.00 add to cart or Buy Direct from
Rulon-Miller Books
Share this item