The life of Samuel Johnson 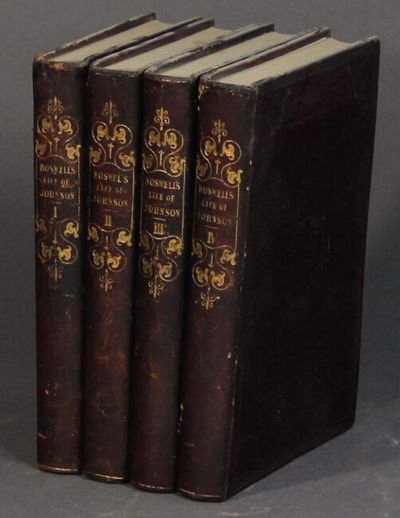 by Boswell, James
Oxford: William Pickering, London; and Talboys and Wheeler, 1827. First Pickering edition, 4 volumes, 8vo, engraved portrait of Boswell and Round Robin plate and a facsimile of Johnson's handwriting; contemporary full blindstamped calf, gilt decorated spines, a.e.g.; light wear to the spines but on the whole very good and sound. CBEL II, 1214; Keynes, p. 54; Kelly 1826.2; Pottle 90: "This edition in four volumes large octavo is the most beautiful that has yet appeared. The editor was Francis Pearson Walesby (1798-1858) Fellow of Lincoln College and afterwards (1829-34) Professor of Anglo-Saxon at Oxford who in the previous year had edited the edition of Johnson's works in the Oxford English Classics, with which this edition of the Life is uniform ... This is the first edition of the Life to include a portrait of Boswell as a frontispiece." (Inventory #: 53380)
$373.75 add to cart or Buy Direct from
Rulon-Miller Books
Share this item