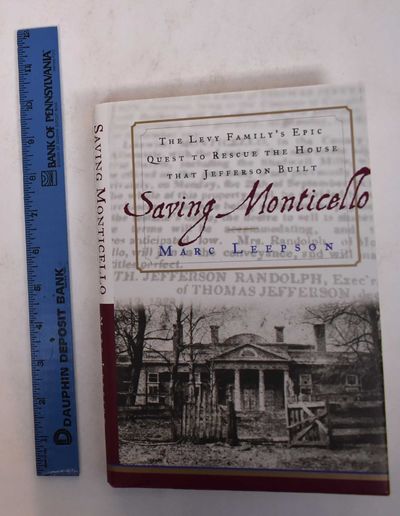 by Leepson, Marc
New York: Free Press, 2001. Hardcover. VG/VG. Burgundy boards with gilt spine lettering. Illustrated dust jacket with black, burgundy, and blue lettering. 303 pp. Illustrations. The history of Jefferson's home after his death. When Thomas Jefferson died on the Fourth of July 1826 -- the nation's fiftieth birthday -- he was more than $100,000 in debt. Forced to sell thousands of acres of his lands and nearly all of his furniture and artwork, in 1831 his heirs bid a final goodbye to Monticello itself. The house their illustrious patriarch had lovingly designed in the Blue Ridge Mountains of Virginia, his beloved "essay in architecture," was sold to the highest bidder. Saving Monticello offers the first complete post-Jefferson history of this American icon and reveals the amazing story of how one Jewish family saved the house that became a family home to them for 89 years -- longer than it ever was to the Jeffersons. With a dramatic narrative sweep across generations, Marc Leepson vividly recounts the turbulent saga of this fabled estate. Twice the house came to the brink of ruin, and twice it was saved, by two different generations of the Levy family. United by a fierce love of country, they venerated the Founding Fathers for establishing a religiously tolerant and democratic nation where their family had thrived since the founding of the Georgia colony in 1733, largely free of the persecutions and prejudices of the Old World. Monticello's first savior was the mercurial U.S. Navy Commodore Uriah Phillips Levy, a colorful and controversial sailor, celebrated for his successful campaign to ban flogging in the Navy and excoriated for his stubborn willfulness. Prompted in 1833 by the Marquis de Lafayette's inquiry about "the most beautiful house in America," Levy discovered that Jefferson's mansion had fallen into a miserable state of decay. Acquiring the ruined estate and committing his considerable resources to its renewal, he began what became a tumultuous nine-decade relationship between his family and Jefferson's home. After passing from Levy control at the time of the commodore's death, Monticello fell once more into hard times, cattle being housed on its first floor and grain in its once elegant upper rooms. Again, remarkably, a member of the Levy family came to the rescue. Uriah's nephew, the aptly named Jefferson Monroe Levy, a three-term New York congressman and wealthy real estate and stock speculator, gained possession in 1879. After Jefferson Levy poured hundreds of thousands of dollars into its repair and upkeep, his chief reward was to face a vicious national campaign, with anti-Semitic overtones, to expropriate the house and turn it over to the government. Only after the campaign had failed, with Levy declaring that he would sell Monticello only when the White House itself was offered for sale, did Levy relinquish it to the Thomas Jefferson Foundation in 1923. Rich with memorable, larger-than-life characters, beginning with Thomas Jefferson himself, the story is cast with such figures as James Turner Barclay, a messianic visionary who owned the house from 1831 to 1834 the fiery Uriah Levy, he of the six courts-martial and teenage wife the colorful Confederate Colonel Benjamin Franklin Ficklin, who controlled Monticello during the Civil War and the eccentric, high-living, deal-making egoist Jefferson Monroe Levy. Pulling back the veil of history to reveal a story we thought we knew, Saving Monticello establishes this most American of houses as more truly reflective of the American experience than has ever been fully appreciated.--Publisher description. (Inventory #: 169903)
$29.99 add to cart or Buy Direct from Mullen Books
Share this item