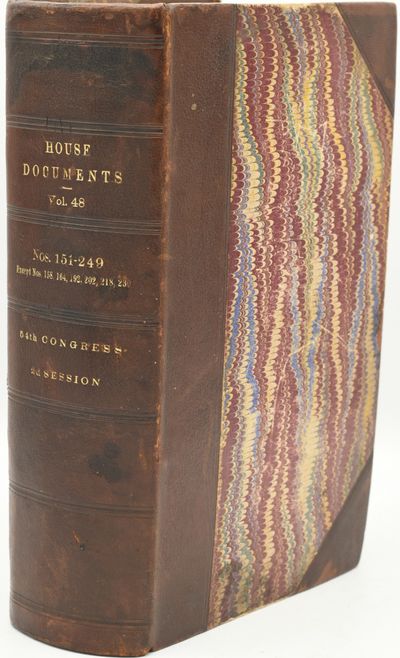 by [United States]
Washington, D.C.: Government Printing Office, 1897. First Edition. Half Leather. Very Good binding. The House of Representatives, 54th Congress, 2nd Session, Documents number 151 through 249. Some of the issues dealt by the Congress include "Investigation of Coal and Gold Resources of Alaska," with a color folding map, 'Annual Reports' from ten railway companies, and a "List of Judgments, Court of Claims." The Panic of 1893, caused by collapsing wheat prices and a coup in Buenos Aires, was first signaled by the bankruptcy of the overextended Philadelphia and Reading Railroad. Blaming the largely Democratic Congress and President, voters vented their frustrations in the ballot box. The historic midterm elections just before the 54th Congress saw the Republicans gain 130 seats, securing the first of a series of GOP-controlled Congresses. Lacking House Documents No. 158, 164, 192, 202, 218, 230. With 18 folding maps and surveys, some color, some quite large, with significant loss to the final two maps. Minor fore edge dampstaining to the final five House documents. Half brown morocco over marbled paper, with gilt lettering on the spine. Very Good. ( ). Very Good binding. (Inventory #: 286765)
$650.00 add to cart or Buy Direct from
Black Swan Books
Share this item