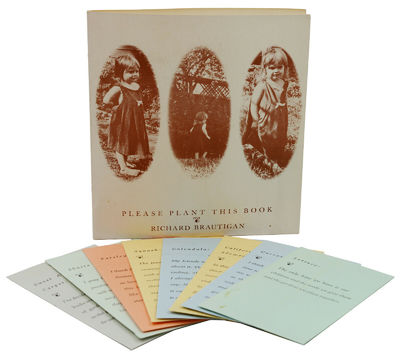 by Brautigan, Richard
San Francisco: Graham Mackintosh, 1968. First Edition. First edition. Stiff cream wraps containing eight unopened seed packets with a short Brautigan poem on each side, planting instructions on the other. Very Good+ or better with slight toning and shelf wear to wraps, offsetting to fore edge from glued flaps (some copies of this book had glued flaps, others didn't; no known priority), some light staining to seed packets from contents. Nice shape overall. All packets present, unopened, containing their original seeds for planting in the 1968-1969 season. Four of the seed packets were flowers, the other four were vegetables. A rare and unique poetry book from the author of Trout Fishing in America, metaphorically connecting the flower generation to its successors, the back-to-the-land and environmental movements. (Inventory #: 140937915)
$1,800.00 add to cart Available from
Burnside Rare Books
Share this item
Burnside Rare Books
Offered by

Portland, OR : L.M. Berry , 1977
(click for more details about Black Retrospect)
View all from this seller>