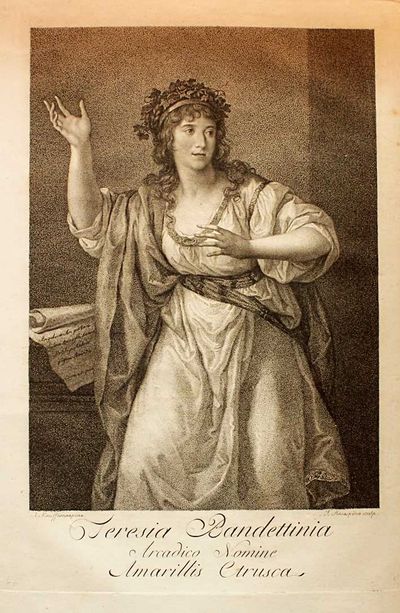 by Bandettini Landucci, Teresa.
Parma: Luigi Mussi, 1805. First edition. Very Good/Teresa Bandettini (1763-1837) filled theaters all over Northern Italy doing performances of improvisational poetry, sometimes accompanied by dance, adorned in clothing deemed "Grecian." She worked as a street performer first, gathering crowds, and reciting extemporaneous poetry on any subject that someone would call out, then passing the hat. Self-educated, she became admired for her erudition. (The so-called "improvvisatori" in Italy fascinated the expatriated English Romantics, and were pursued by them.) In addition to her improvised verse, Bandettini composed several structured pieces, including this romance epic in octaves on the adventures of Theseus and the foundation of Athens. While Bandettini's work has been largely ignored by the curriculum, we understand that she overcame debilitating personal circumstances and oppressive class and gender origins to achieve her celebrity. Angelika Kauffmann painted her portrait. The Duke of Modena (and other wealthy patrons) housed her and supported her literary career. Antoine Saliceti, Napoleon's chief administrator in Northern Italy, underwrote La Teseide. (He said that he pitied posterity for not being alive to hear her perform.) Bandettini's name resurfaced in 2002 with the discovery of six lost sonatas dedicated to her by the young Niccolò Paganini.. Quarto (31 cm); 2 volumes. [8], x, 272; 322 pages, and full-page engraved frontispiece of the author (after Angelica Kauffmann, mispelled "Kaufmnan"). Bound in publisher's pasteboard decorated in tortoise shell patterns ("carta tartarugata"), with printed paper labels on spines. Pages bright, fresh, and untrimmed. Binding somewhat abraded along joints, with some slight separation at tail of volume 1. Remarkably well-preserved set in unsophisticated state. References: Ferri, "Biblioteca Femminile Italiana," p. 34 ("edizione magnifica"); Parenti, "Rarità bibliografiche" (1958) vol 4, p. 80; paper covers: Quilici, Carte decorate, #100. (Inventory #: 6053)
$1800.00 add to cart Available from
Rodger Friedman Rare Book Studio
Share this item
Rodger Friedman Rare Book Studio
Offered by