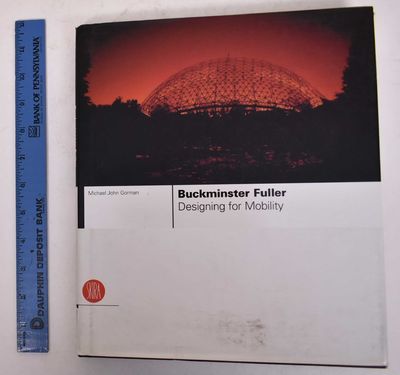 by Gorman, Michael John
Milan: Skira, 2005. Hardcover. VG. edge-wear to covers; rubbing to corners. small, red remainder spot to lower textblock. dustjacket has edge-wear; scuffs & scratches.. Black boards with white spine lettering. White and color-photographic dust jacket with black lettering. 207 pp. BW and color illustrations. Hailed as one of the greatest minds of our times, Richard Buckminster Fuller (1895-1983) is known as an American visionary. Designer, architect, engineer, inventor, and philosopher, he was undeniably one of the key innovators of the 20th century. This volume provides a visually rich and complete overview of Fuller's design and architectural production, situating Fuller's projects in their historical context. The book features never-before-published material from the Fuller archives that were recently donated to Stanford University. Michael John Gorman's essay offers an in-depth analysis of Fuller's work-focusing more attention on his innovative architectural projects than to other aspects of Fuller's "design science"--As well as an interesting perspective on post-war American society and architectural culture. Chapters include concepts of Fuller's philosophy, his manifesto for mass-produced housing, the role of mobile shelter in transforming behavior, geodesic domes, and Fuller's early experiments. Fuller's achievements, astonishing design, and production are fully documented using original and often unknown archival materials. -FirstSearch. (Inventory #: 169975)
$25.00 add to cart or Buy Direct from Mullen Books
Share this item