Mermaids, Mummies, and Mastodons: The Emergence of the American Museum 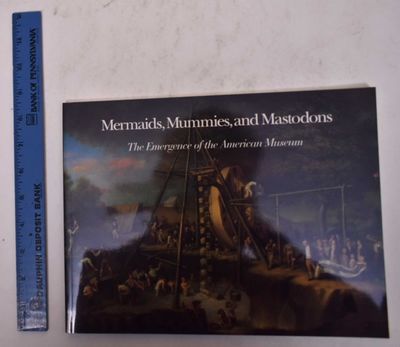 by William T Alderson
Washington, DC: American Association of Museums, 1992. Paperback. As New. Color pictorial glossy glued wraps. 104 pp., profusely illustrated in color and bw, also with diagrams and charts. Contents as follows: Mermaids, mummies, and mastodons: an exhibition on the evolution of early American museums / Edward P. Alexander -- Entrepreneurs and intellectuals: natural history in early American museums / Sally Gregory Kohlstedt -- A timeline of the Peale family, 1814-1829 -- In pursuit of a profit / John W. Druel -- A timeline of Peale's Baltimore museum, 1814-1829 -- Peale's museum: politics, idealism, and public patronage in the early republic / Ruth Helm -- Social class and participation in Peale's Philadelphia museum / David R. Brigham. A "Feejee mermaid," the skeletal remains of a "wooly mammoth," and a "cabinet of learned turkies which will dance to music," were attractions at Baltimore's Peale Museum in the early 1800s. As the nation's first museum directors, Charles Wilson Peale, and his sons Rembrandt and Rubens, laid the foundation of the modern American museum. (Inventory #: 169965)
$29.99 add to cart or Buy Direct from Mullen Books
Share this item