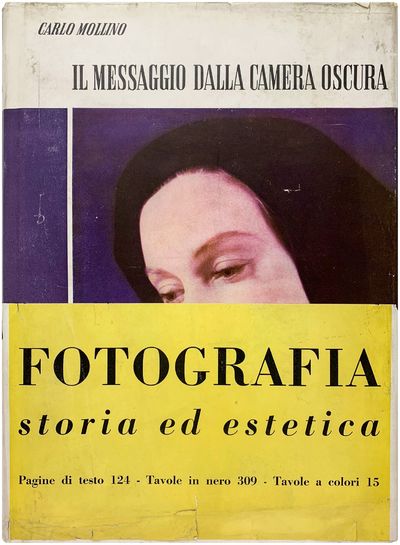 by MOLLINO, Carlo
Torino: Pressa la Casa Editrice Chiantore di Torino, 1949. Rear hinge split with a small divot to the rear spine gutter (not affecting pages), front hinge has a smaller split, foxed at top edge; a very good copy (binding is tight) in an almost very good jacket, worn but complete, with the publisher's bellyband (worn).. First Edition. Large quarto. Text in Italian. Mollino's important survey of photography from its inception to the date of publication, including reproductions of his own work, and photographs by Man Ray, Edward Steichen, Edward Weston, Dorothea Lange, and very early Richard Avedon, among others. With 15 tipped-in color plates. This elegantly designed book is widely considered one the best Italian photobooks of the 20th century. Laid in are three original photographs by Mollino, each 7 x 9 1/4 inches, possibly vintage. One of the three images appears in the book on page 224 and is noted as such on the verso; the other two are from the same period. (Inventory #: 24577)
$5,500.00 add to cart or Buy Direct from Harper's Books
Share this item
Harper's Books
Offered by