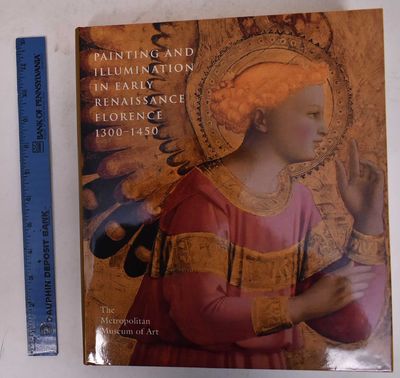 by Kanter, Laurence B. with others
New York: The Metropolitan Museum of Art, 1994. Hardcover. VG/VG. Red cloth with goldish color pictorial glossy dustjacket. 394 pp.; 55 color plates and 135 bw figures;. Erratum taped inside front cover. Contents as follows: The illuminators of early Renaissance Florence / Laurence B. Kanter -- The books of the Florentine illuminators / Barbara Drake Boehm -- Fra Angelico studies / Carl Brandon Strehlke -- Painting and illumination in early Renaissance Florence, 1300-1450 / Barbara Drake Boehm [and others]. During the incredible efflorescence of the visual arts in Florence of the fourteenth and fifteenth centuries, some artists turned their hands equally to various media, manuscript painting among them. In the fourteenth century these included one of the most mysterious and engaging personalities of early Renaissance Italian painting, the Master of the Codex of Saint George, as well as such artists as Pacino di Bonaguida, the Maestro Dadesco, the Master of the Dominican Effigies, Don Silvestro dei Gherarducci, and Don Simone Camaldolese. Toward the close of the fourteenth century, there emerged in the same Camaldolese ambiance where Don Silvestro and Don Simone flourished a major artist of international stature, Lorenzo Monaco. Don Lorenzo eventually left the monastery to operate a secular workshop that became an important force in the early-fifteenth-century Florentine art world, producing lavish illuminated manuscripts in addition to frescoes, altarpieces, and numerous pictures for a growing domestic market. One of Don Lorenzo's greatest legacies may have been the training of Fra Angelico, a Dominican monk and a painter of surpassing genius, who is in large part responsible for the evolution of a truly Renaissance style in the visual arts. The innovative naturalism of Angelico and his followers effectively brings to a close the great age of illumination in Early Renaissance Florence. . By way of introduction to the objects themselves are three essays. The first, by Laurence B. Kanter, presents an overview of Florentine illumination between 1300 and 1450 and thumbnail sketches of the artists featured in this volume. The second essay, by Barbara Drake Boehm, focuses on the types of books illuminators helped to create. As most of them were liturgical, her contribution limns for the modern reader the medieval religious ceremonies in which the manuscripts were utilized. Carl Brandon Strehlke here publishes important new material about Fra Angelico's early years and patrons - the result of the author's recent archival research in Florence. (Inventory #: 169980)
$29.99 add to cart or Buy Direct from Mullen Books
Share this item

Mark Twain and his illustrators (Vol 1)

New York : Tudor Publishing Co , 1971
(click for more details about Homage To Pablo Picasso)
View all from this seller>