The Odyssey of Homer; The Iliad of Homer 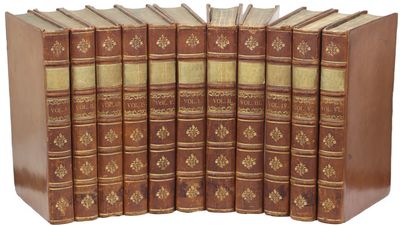 by Homer (Alexander Pope, translator)
London: Printed by Charles Rivington, 1760. Later edition. Hardcover. Near Fine. 11 vol. 8vo. [3], iv-xli, [4], 240, [2]; [5], 6-272, [2]; [5], 6-316, [2]; [5], 6-277, [3]; [5], 6-280, [23], 4-28, [2]; [3], iv-cli, [4], 4-175, [5]; [5], 6-189, [3]; [5], 6-304, [2]; [5], 6-301, [5]; [5], 6-287, [4]; [5], 6-212, [76] pp. Volumes are uniformly bound in contemporary full calf with gilt tooling on the edges of the boards, spines in six compartments with gilt tooling and an unpolished calf label on each; all edges marbled. Beautiful marbled blue and white endpapers. Each volume also includes a lovely, thin blue-ribbon as a bookmark. The set is illustrated with numerous woodcut head and tailpieces (each new book of the poem is accompanied by a half-title with a head and tail-piece). At the beginning of each new book of the poem a miniature woodcut illustrates the page, and at the end of several of the books a woodcut illustration is also included. The miniature woodcuts include illustrations of famous figures and scenes in myth like Scylla, Odysseus and the suitors, Odysseus and Laertes, Athena, Achilles and Agamemnon, the Doloneia, and more. Volume one of the Iliad includes two plates as the frontispiece, a wood engraving of the bust of Homer which resided in Farnese Gardens (located on the north of the Palatine Hill in Rome) and a copper engraving of Alexander Pope surrounded by a decorative wood engraving, sculptor is credited as Miller at the bottom of the plate. In the rear of Volume one of the Iliad are two folding plates and one folding map. The map is of Homeric Greece and Troy, a beautiful copper engraving. The other two folding plates are copper engravings of Achilles' shield (with the different sections labeled) and an illustration of Troy and its environs, with the Scamander river depicted and an ancient fleet of warships depicted as drawing up to the Phrygian coastline. Volume one of the Odyssey includes an essay "A General View of the Epick Poem, and of the Iliad and the Odyssey, extracted from Bossu". Volume five of the Odyssey includes a general index and Homer's Battle between Frogs and Mice, translated by Archdeacon Thomas Parnel and corrected by Pope. The Iliad's volume one includes an essay on the life of Homer and a geographical table of Troy. Volume six of the Iliad includes a general index, a poetical index explaining the story of the Iliad, an index of characters, one of similes (categorizing similes down to the animals used in the comparison), a geographical index, and an index of arts and sciences, pointing out where processes like prophecy and navigation are used within the poem. Before each book of the poem Pope includes an "argument" or a summary of the book and where the main characters are at in the story. Each volume has a small label on its front pastedown from a former owner (Hauptnummer, likely a late eighteenth or early nineteenth century collector), with each label numbered as a volume in his or her library. Volume one of the Iliad has an old bookseller's label on the free endpaper (Charles Schambourg of Vienna, a French bookseller and printer who worked in the late eighteenth and early nineteenth century). This edition is a 1760 reprint of the 1715-20, 1725-26 edition of Pope's famous (and what is arguably the most poetic), translation. Young 203. The Iliad and the Odyssey are foundations of western literature, with a vast amount of scholarship done on the poems. Both the Iliad and the Odyssey continue to be taught in literature and Greek courses around the world. Homer's work offers literary and historical insights on life in the bronze and archaic ages of ancient Greece and Asia minor as well as war and the nature of humanity. A beautiful, finely bound example. A Near Fine set with some very minor foxing to a few leaves in two of the volumes, spines show minor spots of wear, tiny puncture to the front board of volume five of the Odyssey affecting the first three leaves. (Inventory #: 00007980)
$4,000.00 add to cart or Buy Direct from
Evening Star Books
Share this item

Specializing in Modern first editions and works of historical and literary significance.

London : Printed by W.B. for A. and J. Churchill , 1706
(click for more details about Posthumous Works of Mr. John Locke)
View all from this seller>