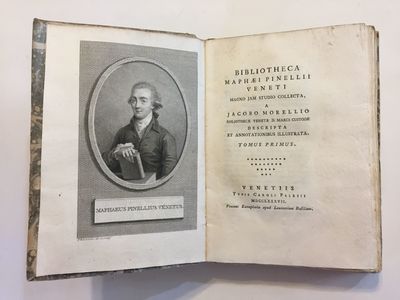 by PINELLI, MAFFEO (collector) - MORELLI, IACOPO (author)
Venice: Carolo Palese (sold by Lorenzo Basilio), 1787. First Edition. Very good. 8vo. 6 volumes. 54, 377 pp., 1 blank f., engraved frontispiece portrait of Pinelli ("F. Bartolozzi del. et sculp."); 4, 468 pp.; 4, 367 pp., 1 large folding plate ('Specimen scripturae in papyro') with small stain; 56, 471 pp.; 8 pp. (pp. 1-2 blank), 360 pp., 5 engraved plates of Egyptian and other antiquities; 16, 365 pp., 1 blank f. Items in Vol. I-III numbered 1 - 7953, Vols. IV-V (Autori Italiani &c.) numbered 1 - 3908, and Libri Francesci, Inglesi, Olandesi, Tedeschi, Spapagnuoli, 708 items, altogether 12,569 items. Contemporary, no doubt original, pale blue marbled wrappers over flexible paste-paper boards (somewhat worn but perfectly sound), original printed spine labels (one missing), uncut and mostly unopened. ¶ Excellent, complete copy in original publisher's boards of the most important catalogue of an Italian eighteenth century private library; its purpose was that of an 'inventory catalogue' for the disposal of the collection either as a whole or 'en detail' (see Morelli's preface). Pinelli (1736-1785) was the last of a family of 'Stampatori Ducali', official printers to the Venetian government, and a keen collector whose library included inherited books. His portrait, of ca. 1760, is one of the few original works by Bartolozzi. After Pinelli's death, his heirs charged Morelli, his close friend, and 'the Magliabecchi of his age' (Enc. Italiana) with the completion of the catalogue which duly fulfilled its immediate purpose. Vol. VI provides a valuable index to the work, at the end of Vol. V there is an index to the ca. 1100 incunabula. ¶ In 1788, the London booksellers James Edwards (1757-1816) and James Robson (1733-1806) bought in Venice for £6,000 the celebrated Pinelli library of which the above is the excellent inventory. While in transit to London on three vessels, one of the ships was captured by pirates and the books thrown into the sea (cf. Ottino and Fumagalli, Bibliotheca bibliographica italica, no. 4180). The remainder of the library was sold at auction by Edwards in 1789, by means of a sale catalogue, which was a shortened translation and adaptation of Morelli's, by Samuel Paterson (1728-1802), another London bookseller and auctioneer (cf. DNB). Although it was not a great success financially, the sale, which brought in £8,637 10s, was the first of foreign books on a large scale to be held in London and put that city on the map as an international center of book auctions. ¶ REFERENCES: Peignot ('Ce catalogue est un des meilleurs qui existent'); Cicogna 4380 ('La fama di questa Biblioteca notissima ... uno dei cataloghi piu ben fatti'); Horne, p. 721: 'This catalogue is one of the best ever executed, not only from the value and number of the curious works described in it, but also for the valuable bibliographical notices of Morelli. The Pinelli collection of books long held a distinguished rank among the libraries of Europe: it was upwards of 200 years forming by the family, and comprehended an unparalleled collection of Greek, Roman, and Italian authors, from the origin of printing; with many of the earliest editions printed on vellum, and finely illuminated; a considerable number of curious Greek and Latin MSS. (biblical, legal, and classical), from the 11th to the 16th centuries.' Taylor, Book Catalogues, pp. 97-98 and 256. Pollard & Ehrman, Distribution of Books by Catalogue, pp. xix, 204, 265, and no. 260. PROVENANCE: Bookplates of Prince Alberto Giovanelli (1876-1937) and a later owner (unidentified) "F.R. (Inventory #: 2697)
$2,200.00 add to cart or Buy Direct from
Michael Laird Rare Books
Share this item

Providence, RI : The Providence Journal Print , 1892
(click for more details about Death in The Mail. A Narrative of The Murder of a Wealthy Widow and The Trial and Conviction of The Assassin, Who was Her Physician, Attorney and Friendly Adviser)
View all from this seller>