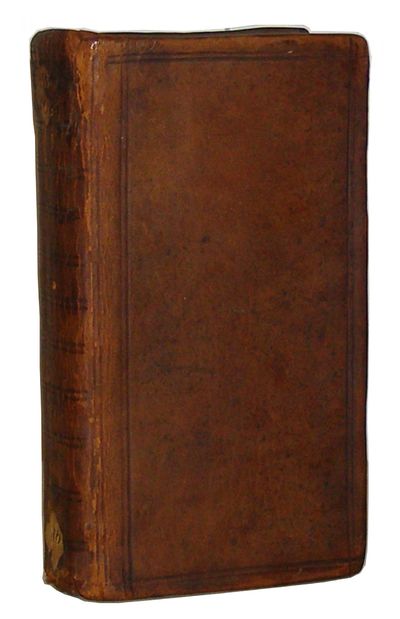 by Harvey, William
Rotterdam: Arnold Leers, 1648 12mo. Fourth edition. With additional engraved title page and 2 full-page engraved illustrations. Contemporary speckled brown calf, double ruled in blind to covers, horizontal rules in blind and paper library labels to spine, red speckled edges. Very good, with shallow chipping to bottom of spine, light wear to hinges and corners, sound binding with strong hinges, former owner bookplate to front pastedown, embossed stamp to title, engraved title, and first page of text, pages lightly toned and light scattered spotting but generally clean throughout. An important work in an attractive contemporary binding. PMM 127. De motu cordis, William Harvey's groundbreaking work on the circulation of the blood, is widely considered the most important book in the history of medicine. First published in Frankfurt in 1628, it describes the motion of blood through the body in a circuit and observes the functions of arteries and chambers of the heart. Much like Vesalius' Fabrica (1543) did for the study of anatomy, this treatise rejected long-held theories about human physiology from the Greeks and became the basis for the modern science of cardiology. The first Rotterdam edition of De motu cordis is the fourth edition overall, containing important textual corrections and the engraved plates. Also significant to this printing are its inclusion of a preface by Zacharias Sylvius and the first edition of James de Back's supporting treatise Dissertatio de corde. Indeed, Rotterdam played an important role in the success and dissemination of Harvey's work: as scholars in England were quick to critique it, doctors in continental Europe were more supportive, specifically Sylvius and de Back from Holland. Harvey himself was born in England, and became appointed physician to James I and Charles I.. Hard Cover. Very Good. (Inventory #: WH001b)
$18,500.00 add to cart or Buy Direct from
B & B Rare Books
Share this item

2 Statements by Picasso. Also a Comment by Merle Armitage.

Is Shakespeare Dead? From my Autobiography

New York: Harper and Brothers Publishers , 1909
(click for more details about Is Shakespeare Dead? From my Autobiography)
View all from this seller>