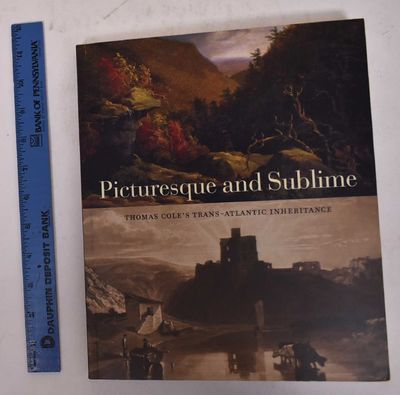 by Tim Barringer; Gillian Forrester; Sophie Lynford; Jennifer Raab; Nicholas Robbins
2018. Paperback. As New. Color pictorial glued wraps.x, 179 pp., profusely illustrated with over 100 color and bw images. Catalogue of an exhibition of the same name held at Thomas Cole National Historic Site in Catskill, New York from May 1 to November 4, 2018. Although the catalogue only lists 31 amply-annotated works, there is a very lengthy and well-illustrated essay which precedes the catalogue. A significant addition to the literature on Cole and his influences and influence. "Landscape art in the early 19th century was guided by two rival concepts: the picturesque, which emphasized touristic pleasures and visual delight, and the sublime, an aesthetic category rooted in notions of fear and danger. British artists including J.M.W. Turner and John Constable raised landscape painting to new heights and their work reached global audiences through the circulation of engravings. Thomas Cole, born in England, emigrated to the United States in 1818, and first absorbed the picturesque and sublime through print media. Cole transformed British and continental European traditions to create a distinctive American form of landscape painting. The authors here explore the role of prints as agents of artistic transmission and look closely at how Cole's own creative process was driven by works on paper such as drawings, notebooks, letters, and manuscripts. Also considered is the importance of the parallel works of William Guy Wall, best known for his pioneering Hudson River Portfolio. Beautifully illustrated with works on paper ranging from watercolors to etchings, mezzotints, aquatints, engravings, and lithographs, as well as notable paintings, this book offers important insights into Cole's formulation of a profound new category in art--the American sublime." -- Publisher's description. (Inventory #: 170006)
$30.00 add to cart or Buy Direct from Mullen Books
Share this item