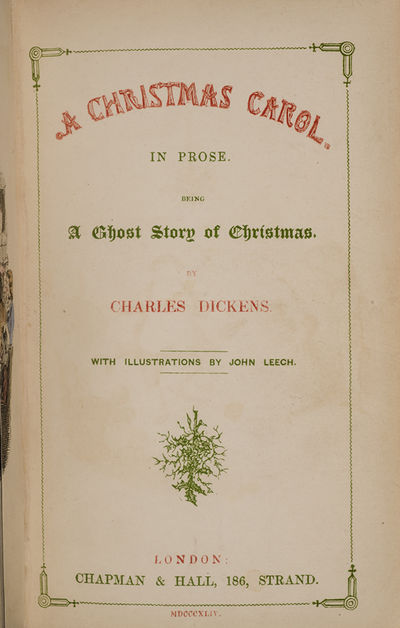 DICKENS, Charles. A Christmas Carol. In Prose. Being a Ghost Story of Christmas. With Illustrations by John Leech. London: Chapman & Hall, 1844.

The current Dickens bibliographer Walter Smith has examined an identical example at the W.A. Clark Library and accepted it as an authentic example of this rare issue. The red and green title-pages and the green half-titles are agreed to have been printed earlier (thus the "trial issue" moniker).

Charles Dicken's Christmas classic, written in a mere six weeks at a low point in Dickens's career, and published at his own expense, A Christmas Carol revived Dickens's fortunes, establishing a robust market for Christmas gift books that survives to this day. The characters of Scrooge and Marley, Bob Cratchit and Tiny Tim, are immediately recognizable even to those who've never read a word of Dickens: "'God bless us every one!' said Tiny Tim, the last of all. He sat very close to his father's side, upon his little stool. Bob held his withered little hand in his, as if he loved the child, and wished to keep him by his side, and dreaded that he might be taken from him." One of Dickens' favorite artists, John Leech would produce the illustrations for all his Christmas books.

H. D. Linton, was the younger brother of the wood engraver, landscape painter, political reformer, and Charles Dickens illustrator, William James Linton (1812-1897). In 1855 H.D. Linton together with his friend M.Â Edmond Morin, devised a new illustrated paper to be calledÂ Pen and Pencil. Morin furnished the money and contributed most of the drawings; H. D. Linton did the engraving (he had studied engraving with his brother and Orrin Smith); William James Linton edited the journal in conjunction with Mr. Macrae Moir.Â After about eight numbersÂ Pen and PencilÂ succumbed to scarcity of capital. Maria Linton, nee Hoover (1815-1858) H.D. was most likely H.D. Linton's sister, first cousin, or niece.

London: Hodder and Stoughton, [1913]
(click for more details about Poison Belt, The)
View all from this seller>